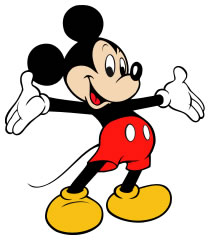 When a character’s voice is first created, something special happens, and although it may be voiced by different people over the decades, takes on a life of its own.

Meet a few caretakers who were chosen to pick up where one of their colleagues left off, preserving each character as an individual with great awe and reverence.

The 3rd Voice of Mickey Mouse Takes His Final Bow

Many of you may have heard that Wayne Allwine, the most recent voice of Mickey Mouse, passed away on May 18, 2009 due to complications from diabetes at the age of 62. He and his wife Russi Taylor (d. July 26, 2019), who voiced Minnie Mouse, met in studio and were inseparable.

Although the two made quite a pair voicing the Disney icons (named as Disney Legends in 2008), they never lost sight of the fact that they were merely the stewards of a legacy, entrusted with taking care of Mickey and Minnie, humbly doing their work in the service of others to keep Walt Disney’s dream, and the spirit of the characters, alive.

Russi Taylor, said of her dearly departed husband, Wayne Allwine, “Walt [Disney] used to say, he put the heart and soul into Mickey Mouse,” She noted that while Allwine was certainly proud to be the voice of Mickey Mouse, he was never boastful or arrogant. The couple, in fact, made a point of not using their Minnie and Mickey voices in public out of respect for the characters. Taylor also shared, “We’ve always said we were the caretakers of these characters.”

Voices of Mickey Mouse (years shown in duration of time as Mickey’s voice):

To further the point of characters being their own people, in honor of his 50th Anniversary (November 18, 1978), Mickey Mouse became the first cartoon character to have a star on the Hollywood Walk of Fame. The star is located on 6925 Hollywood Blvd.

Are You a Character Voice Caretaker?

It’s so very important that the people who take on these roles have a profound respect for those who went before as well as the character itself. People like Wayne Allwine and Russi Taylor have set a phenomenal example of what it means to preserve and venerate their characters for generations of families to enjoy now and for years to come.

I invite you to share your story if you have inherited a voice acting legacy.

Also, if you would like to talk about someone’s work that is now living on through other voice talent, you’re welcome to share those memories, too. Artists may also feel this kinship with other animators, so if you are in that boat, I’d love to hear from you.

Looking forward to your stories,
Stephanie