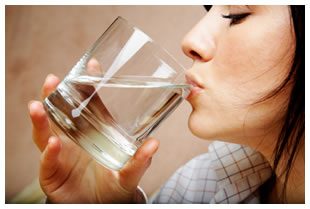 How Much Water Should You Drink Each Day?

Water is bar none the most important beverage on the face of the earth. In fact, our bodies are made of a significant amount of water which means it is of extreme importance to be hydrated.

When you’re working in your recording studio, how much water do you consume on average throughout the day?
Chime in with your daily H2O consumption!

Drinking Water is Good For You

The Mayo Clinic suggests as a basic rule that people should drink eight 8-ounce glasses of water each and every day to keep their bodies hydrated, because water comprises about 60% of our total body weight.

Your body uses water to perform a number of voluntary and involuntary tasks. Mayo Clinic states: “The average urine output for adults is about 1.5 liters (6.3 cups) a day. You lose close to an additional liter of water a day through breathing, sweating and bowel movements. Food usually accounts for 20 percent of your total fluid intake, so if you consume 2 liters of water or other beverages a day (a little more than 8 cups) along with your normal diet, you will typically replace the lost fluids.”

That’s a lot of water to replace!
If you exercise, you may drink even more than the suggested guideline of eight 8-ounce glasses per day, and if you’re busy talking or performing, the same may be true for you.
Is it fair to say that professional voice actors consume more water on a daily basis than the average person?

How much water do you drink in a given day?

Leave a comment!
Looking forward to hearing from you,
Stephanie
Â©iStockphoto.com/Sergey Tumanov

With the launch of our new creative services, we’ve put a lot of thought and effort into how clients post jobs.

Voice Over
10 Ways to Make Your Proposals Better in 2021

Voice Over
How to Deliver An Authentic and Conversational Read

Professional voice actors share their advice and tips to help you deliver an authentic and conversational read.