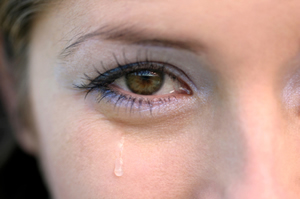 Can you control your voice when you feel overwhelmed with emotion?
I’m intrigued by how some people seem to be able to hold it together and remain poised as they perform or speak publicly.
Many actors have found a way to do this. Have you?
Hear more about this interesting phenomenon in today’s VOX Daily.

When I was in high school, our school’s Fine Arts department took a trip to New York City. Any student participating in choir, orchestra and band was invited to go on this trip with the purpose of gaining a new perspective on what a career in the arts could look like.
We visited cultural institutions such as the Metropolitan Museum of Art, Lincoln Center, and the American Academy of Dramatic Arts to name a few and also were able to see a real Broadway show.

The group I was in attended a performance of Annie Get Your Gun. Bernadette Peters played the title role. Although the show was amazing, the one memory that remains with me to this day is how Bernadette Peters was able to sing through her tears. Even as tears streamed down her cheeks, she was able to sing clearly, expressively and without wavering one bit.
Whether the piece actually moved her to tears or those tears were produced on command I do not know. What I do know is that she was able to perform in such a way that her emotions, while present, did not overtake the professionalism of her performance or compromise her vocal composure.
It isn’t often that you witness someone being able to control their voice while crying but it can be done.

Can You Do That?

Perhaps you have mastered this skill as an actor and might have some wisdom to share.
If you are able to speak evenly or sing through tears, be sure to comment on this post and let us know how it’s done!
Best wishes,
Stephanie
Â©iStockphoto.com/Viktor Kitaykin