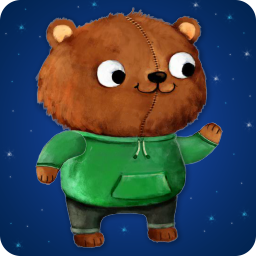 “The whole process was smooth and stress-free.” – Kryssy Hurley, Client

Time for Bed, Little Ted, is a charming story app that provides a shared bedtime experience for parent and child.

Created by a teacher, Krystal “Kryssy” Hurley – a parent herself – the story app involves aspects of Personal and Social Education, including routines and self-care, as well as child-friendly interactions. With a ‘Know What’s Inside’ seal of approval, it also encourages the development of early reading and language skills. Time for Bed, Little Ted is supportive of Bloom’s Taxonomy, U.K. Early Years Curriculum, the U.S. Common Core Curriculum for Kindergarten, and is an original rhyming story in both English and Spanish, with UK/US spelling choices in English text. The attractive and original illustrations were created by artist Monika Suska, and are part of fun touch screen interactions throughout. There is also a “Record Your Own Narration” function, a useful feature if a parent/caregiver plans to be away from home, as well as “Read To Me/Read On My Own” options for older children.

As outlined on the app’s page on the iTunes App Store, “Professional voice actors read this calming bedtime story, which is supportive of early learning and has easy to use, fun interactions.”

Prior to using Voices.com, Kryssy had used a British actress for the English narration of her preschool story app. While she was very happy with the voice actor and her performance, the process of recording was cumbersome:

“The quality was high, and I was completely satisfied with the end result. The downside was the logistics of booking the recording studio time and finding a time slot when the talent had an availability. However, quality is paramount, and I didn’t want to compromise.”

With more voice-over recordings needed, Krystal was eager to find a voice artist who was available on short notice, who was able to record from home, and who didn’t require Krystal to find the time to travel to the studio on the day of recording. With these needs in mind, she decided to give Voices.com a try.

The voice artist Krystal chose on Voices.com was able to record and edit using her own studio.

“The whole process was much quicker, and communication and edits were easy to achieve.”

Krystal used a Spanish narrator to translate an English rhyming text. The voice artist then provided narration for Krystal’s app. Krystal had anticipated it being a challenge to find someone who could provide the same high quality recording as the English narration from British actress, Jasmine Hyde, whom she had hired first.

“I also had a very precise idea of the tone and style I wanted for the narrator’s voice. The quality of narration has a huge impact on the overall quality of the app and I knew I had to get this just right if it were to be successful.”

She was initially concerned that the Spanish narration would not be as high in quality as the English narration. “However, the narration provided by Voices.com was every bit as good as a talent in a rented studio,” Kryssy shares. “The whole process was also quick, easy, and professional.”

Kryssy had 14 responses to the script almost immediately. “[They were] all of a high quality and wide variety,” she says, “and I was able to award the project within a couple of days. After the script was sent out, my narrator was able to translate and narrate, with various options, within the 3-4 weeks I had hoped for.” She was able to do all of this without booking a single studio space.

The narrator Kryssy chose, Alejandra Labraga Arbelo, was able to offer several different reading styles, including an appealing and calming voice, perfect for reading a bedtime story. Kryssy was also delighted to have found someone who was able to translate a rhyming text accurately and creatively. Further edits were made, at the client’s request, and were dealt with promptly.

The final publication of the app was in January 2016. Kryssy says: “In spite of delays at my end, the narrator remained available, even though the project had been completed and paid for, should any further edits be needed.”

“I have been delighted with the response to the app, after publication, and pleased that the app has achieved several awards and quality marks. I will certainly use Voices.com for future projects.”

The app is now available on iOS and Android platforms, and Krystal has recently signed a contract with a digital company to put the app into public libraries in the U.S. Little Ted has received excellent reviews on a range of sites, with many reviewers making reference to the professional narration.

Time for Bed, Little Ted can also be found on The Mom’s Choice Awards Shop.

About Time for Bed, Little Ted

Time for Bed, Little Ted, is a charming story app that provides a shared bedtime experience for parent and child. Created by a teacher, Krystal “Kryssy” Hurley – a parent herself – the story app involves aspects of Personal and Social Education, including routines and self-care, as well as child-friendly interactions.

BabyStep.tv’s aim is to inspire parents. There is extensive research about childhood development, but few have access to it. We want to make that research available to parents.

Texture by Next Issue is bringing the world’s greatest magazines to life on the digital device of your choice. Next Issue Media, the start-up company behind the Next Issue App, is a joint venture formed by five leading North American publishers – Rogers, Condé Nast, Hearst, Meredith, and Time Inc.