Despite the hundreds of thousands of individuals working in the voice over space in the media and entertainment industry, it has been largely unclear what the total size of that voice over market is.

In order to gain an extensive and comprehensive look at the voice over industry around the world, Voices commissioned an independent study to craft a high-level overview of the vast opportunities that exist, including sectors of interest and growth, as well as the broad-scope value of the market.

This 2017 report is an exploration of the state of the global voice over market, using the most recently available 2015 information.

How Much is the Global Voice Over Market Worth?

Around the world, the dollar value of work that voice over actors completed totals over $4.4 billion USD, with approximately 19% of that value contributed by North America. 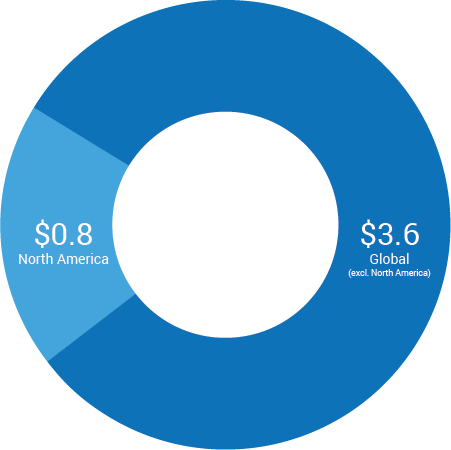 Where are the Jobs Being Completed?

14% of the voice over jobs are completed in North America. 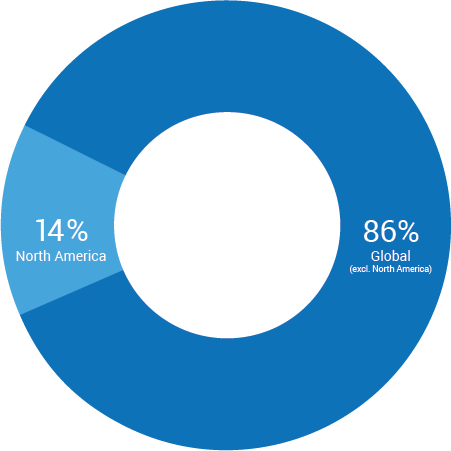 Which Industries are the Jobs Completed For?

58% of global voice over work is for the Entertainment industry, the largest ‘consumer’ in the category. 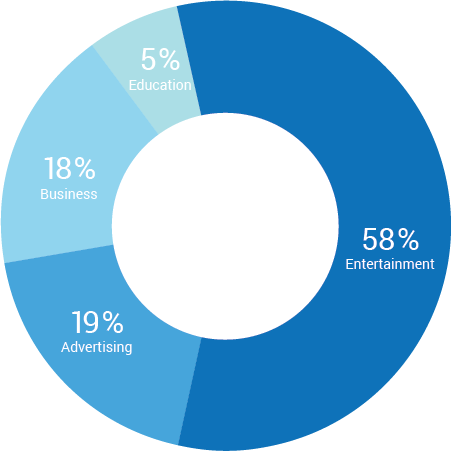 What is the Dollar Share by Type of Project?

Outside of North America, animated videos under 20 minutes in length comprised the majority of dollars spent in voice projects. Within North America however, this project type was only responsible for just over a fifth of voice over spending, with corporate promotional videos, internet videos, and audiobooks taking a relatively larger share. 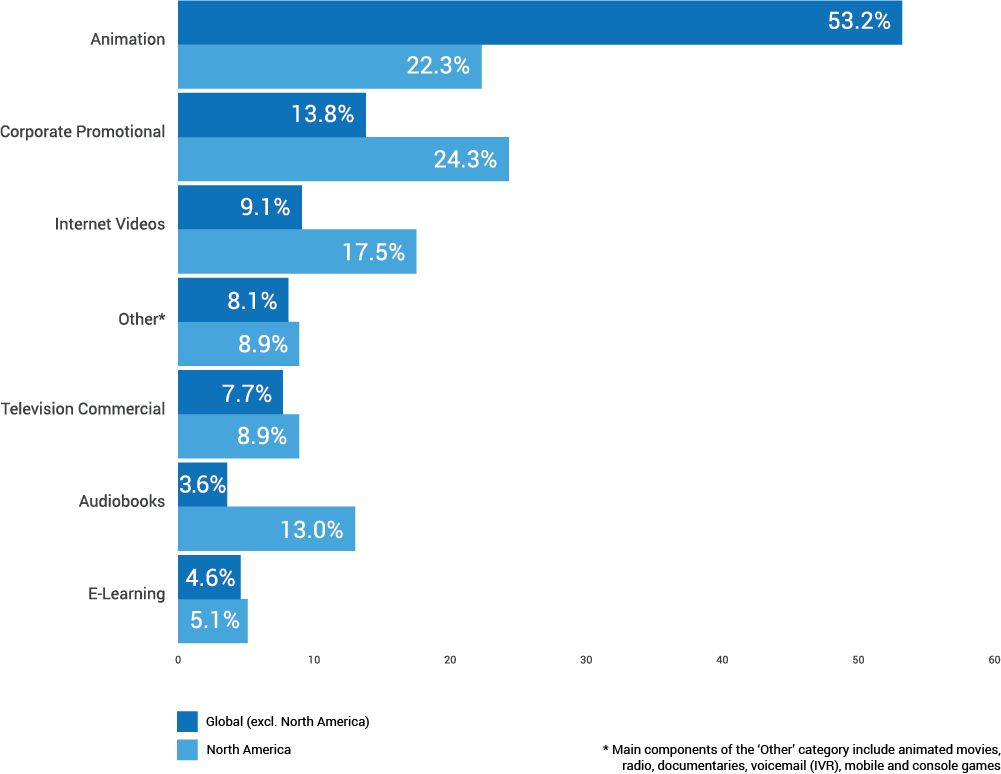 When it comes to animated videos, North America’s proportion of total spend is less than the global number. While it’s tempting to believe that this suggests animated videos are less important in North America, or even that the production is declining, Voices’s internal data indicates that the opposite is occurring: work in animation within this geographic zone is increasing. Therefore, what this data may point to, is the fact that total spend on corporate promotional videos, internet videos, and e-learning is simply increasing much more, and much more quickly.

As North America is often where trends begin, the rapid growth of these other categories (i.e. corporate promotional videos, internet videos and e-learning, in particular) may point to the emergence of similar growth on the global scale. In other words, there is going to be more opportunity, and more worldwide opportunity, for voice over actors, and the industries that surround them.

Contributing to the significance of a number of categories, (particularly e-learning and corporate promotional), is the fact that the dollar value of the voice over work is increasing more quickly than the number of jobs.

Now, a single job represents more work for more voice actors, because that job is being required in multiple languages. For instance, a single job may be trans-created to suit different markets, and more.

Essentially, brands are more frequently seeking to spend once on video production, and invest, in a more cost-efficient way, on voice over to create many different versions, which will be more appropriate for different audiences and markets.

Surprising to some may be that radio, often the first category thought of when voice over comes to mind, represents less than 1% (0.7%) of total work completed.

The fundamental problem facing the media and entertainment industry is creating high quality content at scale. This is the friction point. Digital media content creation is the most efficient part of the process and production companies can’t keep up with the demand to create digital media, which consists of mixing audio, video, images and text into a compelling story.

Having stated the challenge, this also highlights the opportunity at hand. In the coming pages, six vertical markets will be described revealing what they are, how fast the market is growing and how big the market is currently. All the statistics will be sourced when appropriate.

People use smartphones, tablets, laptops, desktops, e-readers, game consoles, connected TVs and set-top boxes to access video and other content, and they expect that content to flow seamlessly across devices and media platforms. This presents opportunities for brand marketers and content owners that understand how to deliver to increasingly demanding customers.

The global advertising market reached $495 billion this year, up +3.8% on 2011. The US remains the largest market with $153 billion in advertising revenues. Japan, China, Germany and the UK complete the top five.

Video is the fastest-growing segment of online advertising, and for good reason. The amount of online and mobile video content is exploding, and most of this content is supported by some type of video spot. The ubiquitous voice-over helps tell the brand story in a compelling and meaningful way.

Viewing online video is a burgeoning habit among the US population, with 50.5% of the population engaging in this activity in 2011. Growth will continue at a modest pace through 2015, when penetration will increase to 60.1% of the general population. Advertisers looking to connect with prospective buyers will be relying more heavily on video, regardless of if the sale is to be made to a consumer (B2C) or a business (B2B).

Conventional TV will continue to dominate spending: At $64.5 billion, TV will make up 38.9% of total media ad spending in the US in 2012. In contrast, online video’s $2.9 billion will contribute a mere 1.7%. That imbalance is why Dave Morgan, chief executive officer of Simulmedia, said that digital video advertising “is more of a compliance buy when the clients say they want multiscreen.”

Over-the-air radio spending was up 7.2% last year, and will rise a further 2.5% in 2011. Radio had a positive year, partly because it’s an inexpensive, flexible medium often used to drive traffic and promotions when branding campaigns are reduced in challenging times.

Another form of demonstration which has become very popular as of late are “explainer” videos. These can take a variety of forms including animated characters, stop motion, paper cut-outs, claymation and white-boarding. CommonCraft, a pioneer in this field, created simple videos using paper cut-outs to represent the characters and then adding voice-overs for the dialog between the characters. Today, SwitchVideo is a leading provider of explainer videos. The goal of these videos is for the viewer to understand what it is the product does. If a business shows a video to a person in their target audience and that individual understands what the product does after watching the video, the video is then considered successful, mission accomplished.

When companies innovate and introduce new products to the market, video is becoming the go-to format to explain how a product or service works. An example is how inventor Josh Guyot’s highly successful Kickstarter Campaign included a product prototype video that conveyed to the world the amazing possibilities of Galileo™.

The video game industry is one of the fastest growing sectors in the U.S. economy. The North American video game market will continue growing by approximately five percent annually through 2015. From 2005-2009 the industry’s rate of growth was more than seven times the rate of growth for the entire economy. In addition, computer and video game companies posted strong overall sales in 2011 with revenues of nearly $25 billion.

As Brandon Curial, president and CEO of game developer and publisher Venan Entertainment Inc., says, “You have the older gamers that haven’t stopped playing, and you have younger kids that are getting into it every day. Each year, the market just expands, and it’s going to keep expanding for, well, a long time.”

There is a positive economic impact of the gaming industry.
Currently, video game companies directly and indirectly employ more than 120,000 people.
The average compensation for direct employees is $90,000, resulting in total national compensation of $2.9 billion.

Producers of magazines, news media and seminars are leveraging new publishing tools and converting much of their content into audio form.

eReaders and eBooks will follow similar growth trajectories over the next several years, reflecting the close link between content and technology. eMarketer estimates the number of US adult eReader users will reach 53.9 million by 2014, up from 33.3 million in 2011. US eBook revenues are expected to soar to $4.5 billion in 2015, from $1.7 billion in 2011.

The Audio Publishers Association recently conducted two surveys that show the industry’s continued growth and highlighted the value of audiobooks to the consumer marketplace. Unit sales were up nearly 10% in the past year, showing continued consumer interest in audiobooks.

Cloud-based music streaming has arrived in force. Over the past 12 months, on-demand streaming service Tech giants Apple and Amazon launched file-locker systems that allow users to integrate their personal digital music libraries with cloud-based streaming servers; internet broadcasters Spotify and Pandora continue to gain users; and a plethora of other services rose to meet the competitive demands of a reshaped market.

An important finding is that digital audio listening is not a trend—it’s a behavior. TargetSpot, with 40 million monthly unique listeners, reaching over 64% of all online listeners (17), has observed the following: The audience is growing, and listening days and time spent are consistent and lengthy. Listeners simply want access to content via the most convenient delivery option. Engagement has grown as consumers become more comfortable with the medium and functionality of digital audio content sites. Audio ads work. New consumer access points and high engagement levels have led to notable increases in both ad recall and response.

What is clear is that there is overwhelming amount of digital media content for every interest imaginable. This content is packaged in both bite-size pieces as well as long formats. The common thread is that it’s all digital.

For the foreseeable future, the voice-over, performed by a professional voice talent, will remain an important means of telling the story. Yes, the visual element tends to take center stage, however it’s almost always accompanied by a voice-over. And, for those situations where there is no visual element such as radio, streaming audio content, online audio ads, audiobooks and the like, the human voice shines.

As a community of professionals, it will be our responsibility to work together and rise to the challenge of creating digital content that we can be proud of. Join us in this revolution, the digital revolution.