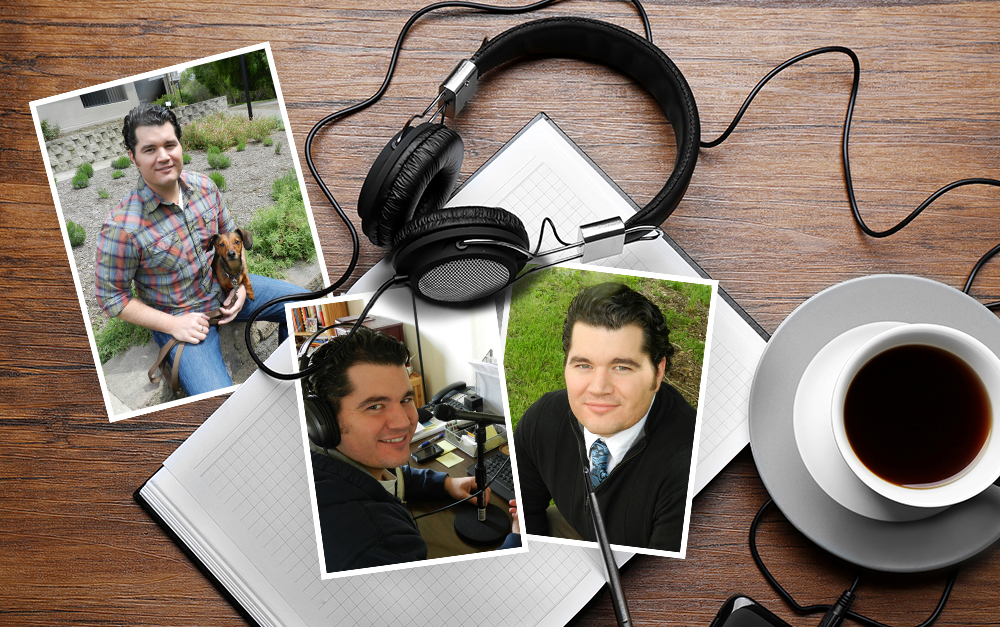 “I have always loved reading out loud since I was a little boy, and I’m actually good enough to make some money doing it! Somebody pinch me!”– Billy Dougan, Professional Voice talent

William “Billy” Dougan has been a professional voice-over talent since 2011 and a Voices.com member since 2013. Born and raised in the San Francisco North Bay Area, Billy is a versatile American English actor who has done voice work for brands like McDonalds, Google, and Porsche, and is the current voice of Lending Club’s national television commercials.

He has also lent his voice to several mobile apps and games as a character actor. He has a baritone/tenor timbre with an impressive 4-octave range for high cartoon tones, and plays the trombone and a little piano. He’s also currently learning to speak Italian.

In the beginning, Billy was doing local auditions through his agent in San Francisco. He was able to get an agent early on, but didn’t realize Voices.com existed until one of his mentors mentioned it in a VO workshop he was taking.

Billy decided to try Voices.com because he wanted more opportunities to audition and get his voice in front of more people.

“I felt I had the talent, but lacked the experience necessary to excel at making VO my career, and not just a hobby.”

“I think I auditioned through my agent for over a year without booking a job. I was a Voices.com member for only a month or two and ended up booking my first job.”

It was within those two months that Billy received an invitation from an e-learning/corporate narration production house. The company had run across Billy’s Voices.com profile and reached out to let him know that they wanted to use him for various projects.

Near the beginning of his membership, Billy was completing up to 180 auditions every single week. The exercise opened up opportunities to work with such clients as Hallmark, American Red Cross, Buffalo Wild Wings, and the U.S. E.P.A. (Environmental Protection Agency), among others.

Billy has also narrated several audiobooks, many of which are available on Audible and iTunes.

“The sheer volume of jobs available allowed me to hone my skills through auditions, while having the potential to book some work along the way. I was sending out 20-30 auditions per day, 6 days a week through Voices.com alone!”

Since then, this baritone voice talent has become more established in his chosen career path, and is laser-focused about the jobs he spends his valuable time auditioning for, coming in at closer to 50 auditions a week now.

In regard to the service itself, Billy loved how streamlined and user-friendly Voices.com’s platform is. According to him, “it’s the easiest to use, it’s the most intuitive of all the sites out there. It’s a one-stop-shop for the VO world.”

Billy also maintains that the Voices.com team, which he described as “helpful, friendly, and nice,” were a great support. As well, according to Billy, the number of audition opportunities, the variety of producers and clients who use the site, and the wealth of resources available to members, such as the rate sheet, workload calculators, podcasts, articles about the business, and practice scripts have all contributed to his impressive success story. He’s only getting started, too!

“I consider it a blessing and a huge win to be able to earn my living doing what I truly love to do, mostly from the comfort of my own home. My dream would be to do something for Disney – especially for the parks or rides – or be in a big-budget Hollywood animated movie. I love doing stuff that appeals to kids. It makes me feel young again.”