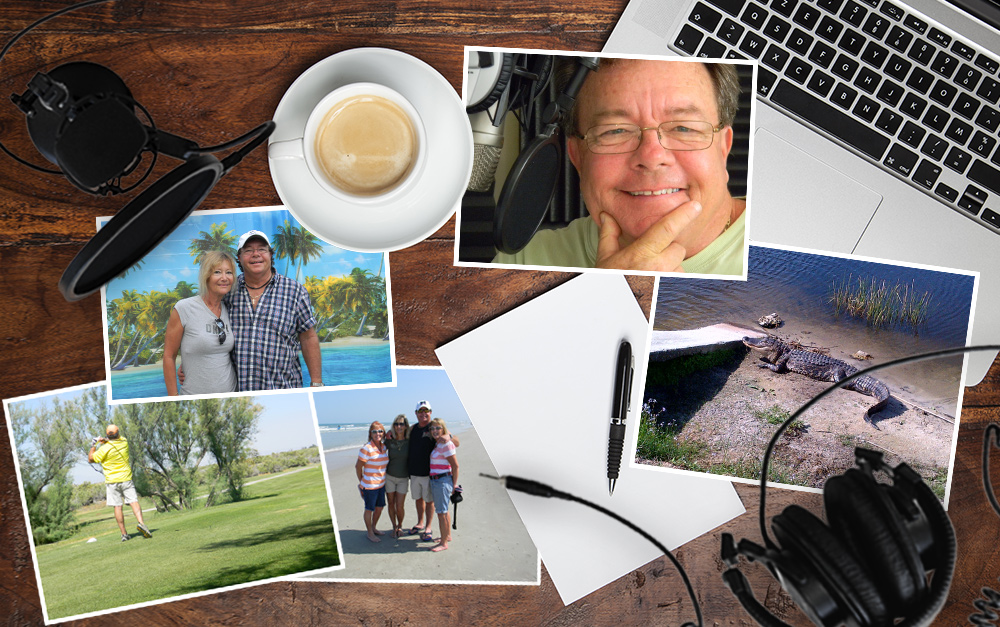 as a professional talent

in a past life

“From job postings to landing a gig, to the communication and finally payment, the process is straightforward. I didn’t really worry about anything other than performing for the client.”– Shane Morris, Professional Voice talent

Shane Morris’ voice is deep and distinctive. You can hear him on everything from documentaries, movie trailers, and television and radio spots to eLearning and video games.

A resident of Sarasota, Florida, Shane is a man of many interests. He loves photography, sailing – casual and racing – deep sea fishing, playing guitar, rodeos, and his wife of 20-plus years, Marcia. When not laying down voice tracks for such heavyweight clients as Proctor & Gamble, Universal Studios Orlando, Xbox, and Hilton International Hotels, Shane can be found at the beach or on the golf course.

Before jumping into the voice over industry, Shane Morris was building high end homes for a major national home builder: “I had built over 400 homes in the Sarasota, Bradenton Florida market from 1998 to 2008, but didn’t survive the big housing bust. I was making about one hundred thousand dollars a year, then boom! Nothing. After a year and a half of looking for work and being fifty-four years old, I realized I wasn’t marketable anymore.”

Shane was in the radio business in Boston in the 80s with limited success. After attending Northeast Broadcasting School to brush up his skills, Shane moved to Florida in ’92. In 1999 he started to consider the media industry again.

Shortly after making the decision to switch careers, Shane received a call from a friend who told him about a voice over coach – John Burr – who also lived in Sarasota. On a whim, he contacted him and signed up for John’s introduction seminar. After the seminar, John suggested an industry reading list to Shane. With that list in hand, Shane read through everything he could. With that industry content front of mind, all coupled with the somewhat recent emergence of the home recording studio and a follow up from John, Shane decided to jump back into the voice over industry.

“John recommended Voices.com as well as many of the authors I had just read. I was aware of the many challenges a voice over career would have, so I approached it from a business standpoint and started with a good foundation that included Voices.com, along with many other sites and marketing campaigns.”

According to Shane, “Voices.com was my first choice for finding voice work.”

Immediately after signing up as a Premium member in 2011, Shane hit the ground running by doing exactly what his coach had suggested at the very beginning; reading. Shane read through all of the resources available on the site, and then moved on to watching and listening to the available digital sources. He even spent time analyzing the demos of the most successful pros on the site as he ramped up his new career.

“Voices.com’s format was easy to understand and the tutorial and webinars made the auditioning process a breeze. Having the ability to listen to the other seasoned voice talent on the Top 100 page kept me motivated to get better.”

For Shane, the workflow was easy to follow, and the marketing opportunities Voices.com afforded him were getting his voice noticed by big brands, such as Bombardier Aircraft Manufacturing, Hilton International for the 2012 Summer Olympics, English–Swedish multinational pharmaceutical and biopharmaceutical company Astra Zeneca, and Red Bull, to name just a few. Shane was experiencing so much success that he decided to take the next logical step – signing up for a Platinum membership.

“When I went from a Premium to a Platinum member I noticed a big jump in the private invites and the jobs being booked. It was a no-brainer to spend the $2,500. That put me in front of many more clients, proving that Voices.com’s marketing works.”

When it comes to usability and payoff, Shane says: “Working with Voices is easy. The steady flow of invites keeps me on my toes. There is no penalty for over auditioning and the bidding is pretty easy. I usually get what I ask for as far as my fee. And the tutorials answer just about any questions a voice talent may have.” He averages 100 auditions per month, and has booked 140 different projects since joining.”

Shane is also the voice of a Glenfiddich ad, produced through Toronto’s Matt Bendo Cinema, the spot was an open audition through Voices.com’s Professional Services department:

“I got my audition in early, and I just had a good feeling about the spot. It was right in my wheelhouse,” Shane explains. During the process, he worked with the client and the project’s Voices.com Account Manager, which resulted in being able to get a glimpse of the video during the recording of the narration that would accompany it. He says that being able to do that helped him with the pacing and clarity of direction. According to him, it’s an example of the best benefit of working with Voices.com – the communication process. “That’s sometimes half the battle of winning a gig such as this. The lines of communication really helped get it successfully done.”

Just as with the Red Bull video, with the Glenfiddich project Shane has enjoyed the possibilities of exposure through a well-known client: “What made this gig so exciting was the knowledge that Glenfiddich would expose me to a much larger client base. That, and the fact that they shared the video with me and allowed me to put it on my web site, is huge!”

“There are many opportunities to audition for jobs that otherwise would be difficult to find. Voices.com makes finding work easy.”

Since finding success on Voices.com, Shane has taken refresher voiceover sessions with John Burr Voice Dynamics to keep his skills sharp in an evolving industry, and looks forward to the next big opportunity to use his unique voice to help bring a client’s story to life.

For more on Shane, visit his Voices.com profile, or his website, www.shanemorrisvoiceovers.com.