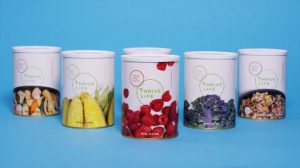 Atomic City is a full service production house, working with clients big and small throughout the United States. The team of four, based in Salt Lake City, Utah, produces high-end commercials, motion graphics, and award-winning films. Their client list includes the likes of Amazon, Microsoft, Prime Music, WyzeCam, and Ruby Tuesday, among dozens of others.

When working with the many clients that Atomic City does, it can be difficult to give each client its own voice, direction, theme, and vision. In order to do this, the team spends a lot of time writing unique copy, shooting in different locations, and using different actors that embody the brand.

Rhett Lewis, Director and Editor at Atomic City, faced this problem when searching for voice actors on a recent project with Thrive Life, a Utah company specializing in freeze-dried food that wanted to craft a message about their brand. While trying to source voice talent for the project, Rhett found the process to be time consuming and pricey. Though he longed to make Thrive Life’s brand stand out like the rest of his clients, he encountered problems with the process he had in place for finding voice actors.

“For a while, I was using a local agency in Salt Lake City. It was more expensive and it took more of my time to set up a voice over session.”
Rhett Lewis, Director, Atomic City

For Rhett, saving time on one aspect of a project means that he can focus his attention and creativity on a different part of the project, or even take on more work. A priority for Rhett has always been saving money. As a production house, finding more wiggle room in their budget means being more adventurous with the content they produce, buying new equipment, or spending resources on building their client base.

Thrive Life asked Rhett and his team to find a specific type of voice for a video about the company. They wanted someone in their 20s or 30s who could deliver the script with a tongue-in-cheek tone. The video would live on the client’s website and be used on their About Us page as an introduction to the brand, its origins, and what the company does.

Rhett realized that the perfect way to source specific voice talent and ensure plenty of suitable auditions would be to use Voices. Through the platform’s Full Service option, Rhett reached out to a Voices account manager who posted the job with a sample script. Within 24 hours, the job had already garnered more than a dozen auditions from talent looking to be the voice of Thrive Life.

“Our client was looking for a very specific type of voice. I reached out to our account manager who returned with an initial batch of 15 auditions. Our client loved so many of the voices that they had a hard time choosing which one was best, which is no small feat.”
Rhett Lewis, Director, Atomic City

When it comes to finding voice actors, Rhett no longer has to worry about a packed schedule full of voice searches and recording sessions. There are only so many hours in the day, and Rhett is thankful that Atomic City’s process now moves much faster, allowing the team to focus on what’s important: its clients.

“Voices is easy to work with and incredibly fast with talent. That we were able to finish the project in just a couple hours after we got the voice over is a major accomplishment. Our client says the video has been extremely successful for them.”
Rhett Lewis, Director, Atomic City