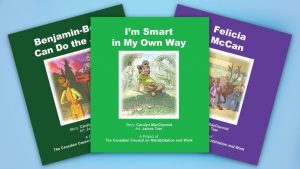 The Canadian Council of Rehabilitation and Work (CCRW) is a non-profit organization whose mission is to break down the barriers of employment for Canadians living with disabilities. For over 40 years, CCRW has been connecting employers and Canadians with disabilities for meaningful employment.

In order to build awareness for CCRW and their cause, communicating the organization’s message of diversity and equitable employment to a broad audience is critical. CCRW encourages teaching about disabilities at a young age, which is why they helped to create a series of children’s books.

Because the books were so well received, CCRW was commissioned by the Accessibility Directorate of Ontario to publish three new books for Canada’s 150th Anniversary. It was decided that the original series of books and the new series be made accessible to a broader audience by turning them into audiobooks.

CCRW’s Senior Administrator, Monica Winkler, hadn’t searched for voice talent often. When she did, she reached out to local recording studios and friends she knew that had done voice work in the past. Even with that experience, Monica was hard pressed to find any local audiobook narrators for the project.

“I realized that I didn’t have the time or skill set to recruit voice talent and schedule studio time. I remember wishing that there was something out there that was easier than what I had been doing by myself.”
Monica Winkler, Senior Administrator, Canadian Council on Rehabilitation and Work

The whole process of finding voice actors, getting them to audition, scheduling recording time, and directing them was intimidating and uncharted territory for Monica. She needed a simple solution, a one-stop-shop that had the high quality talent she needed to make the project a success.

In her search for professional voice talent, Monica eventually landed on Voices.

Needing a hand with finding actors that could narrate the books in English and French, Monica looked into Voices’s Professional Service option, which put her in touch with an account manager who would help her navigate the difficult process of sourcing a narrator that would fit her needs.

“My account manager asked me all the right questions and provided several options for voice actors within a day or two. The auditions that were sent to me were professional voice actors who were eager to do the job.”
Monica Winkler, Senior Administrator, Canadian Council on Rehabilitation and Work

The two got started by posting jobs on the platform for each book. The postings included a piece of Monica’s script to give an idea of what the narrator would read. Within 48 hours, Monica had professional auditions from narrators in both languages. After listening to each for the right tone and emotion, five talent were hired to complete the audiobooks.

Once hired, it took the selected talent just a week to remotely record and deliver the audiobook files. One week later, Monica completed the project and published it for the world to hear.

Despite being unfamiliar with the process of sourcing voice talent, Monica was able to navigate and hire voice actors to help CCRW spread the message of accessibility and diversity around the world. The books have been produced in many different formats, such as Braille, PDFs, electronic versions, ASL/LSQ translations and now, audio versions.