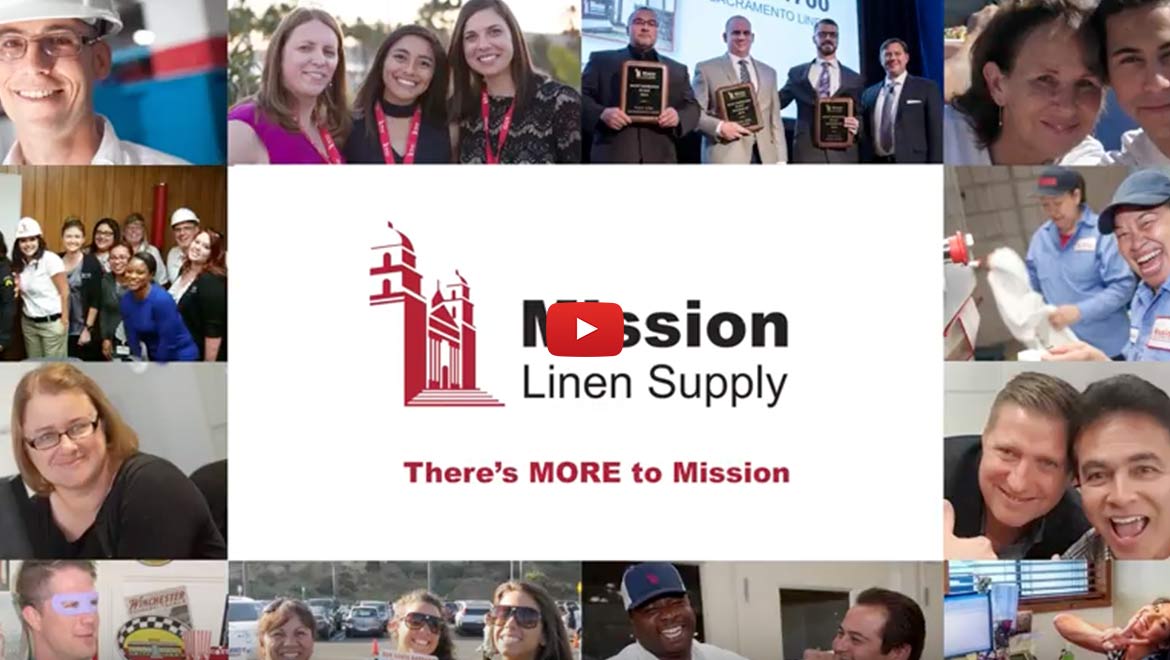 “We researched all sorts of voice over companies when we were first starting to do videos around 2014. We called and interviewed each company and ended up choosing Voices.com because we were confident it had the best selection of professional voice talent. We’ve used [the] platform ever since.”  – Sonja Gessling, Marketing Specialist, Mission Linen SUPPLY

Mission Linen Supply is a family-owned company that has been providing textile service solutions to hospitality, medical, and industrial businesses since 1930. Through rental and direct purchase programs, they provide quality linens, uniforms, apparel, facility services, floor care, and more. With more than 40 plants in five US states, recruiting top employees for roles throughout the country is a necessity.

As a family-owned company, recruiting top talent is paramount to Mission’s success. The company has focused its efforts on hiring people that will represent it well and will be a good cultural fit. But how do they ensure their recruiting efforts are reaching the right people?

In 2017, Marketing Specialist Sonja Gessling was part of the Marketing team that helped HR decide to produce videos to supplement their current recruitment efforts. Realizing that this was an untapped market, Sonja’s team quickly looked into how they could best leverage this type of content and how to produce it. The team had been producing videos since 2014 so storyboarding, writing, filming, and editing the video internally wasn’t an issue. Their original problem was deciding where to go for voice talent.

“We needed a professional voice talent to complement a recruiting video we created that focused on attracting millennials who were interested in starting a career in management with us. The voice needed to strike a chord with the people we were trying to recruit.”

Sonja knew the video needed to be engaging, personable, and geared toward a younger demographic, but she also knew she needed help finding the voice that would speak to that age group.

After doing research and interviews with each talent platform that they had found in an online search, Sonja’s team landed on Voices.com based on its vast selection of professional talent from around the world.

When Sonja started work on the recruitment video, she spoke with a Voices.com account manager with the hope that he would guide them to the perfect voice talent. Sonja communicated her direction and the type of voice she was looking for and, after taking some notes, he got to work finding a voice actor for the project.

“Within a day or two, our account manager came back with eleven auditions. In the end, we had a hard time choosing because most of the auditions fit exactly what we were looking for. We eventually landed on a voice actor who best matched our direction. We couldn’t be happier with how the video turned out.”

Sonja was so impressed with the voice talent her account manager found that she had a difficult time making a decision on who to hire – a nice problem to have.

They chose a talent and received the finished audio file, but Sonja’s team changed the script at the last minute and needed one line to be re-recorded. She notified her account manager, who reached out to the talent to get his availability. Later that day, while her worries grew about the potential cost and how long it would take to get the pick up done, Sonja received the updated file in her inbox.

The video was finished shortly thereafter and has since been used to attract dozens of millennial talent to a career with Mission. Meanwhile, Sonja has continued to use Voices.com, producing engaging recruitment videos in different languages as well as internal training videos seen by thousands of employees.

Founded in 1930, Mission Linen Supply is a family-owned, privately-held company and a leading provider of linens and uniforms to hospitality, medical and industrial businesses. With its headquarters in Santa Barbara, California, the company employs more than 2,500 people in five western states.