Render uses Voices to find voices for its industry-leading work in immersive technology. 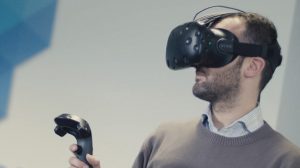 As the world of virtual reality continues to expand, so too does Render’s industry-leading work in immersive technology. The company builds, experiments, tests, and delivers its virtual reality applications to clients so that they can see their products used in context.

Their innovative work was critical in building an environment where a safety company demonstrated how its equipment works, ensuring that workers using the products are doing so properly, effectively, and without risking harm.

In order to have a powerful and immersive application for marketing and sales, choosing the right instructional voice can be the difference between retaining information and disregarding it entirely. As pioneers in the immersive technology industry, Render discovered the advantages of effective voice overs early on.

One of Render’s clients, MSA Safety, is a global company with a sterling reputation of making hazardous work environments safer. Because MSA’s products are used around the world, Render’s mission was to create a VR application for markets in several countries that would simulate real-world scenarios on when and how to use safety solutions.

To produce an immersive application, Render needed to find voices in a number of different languages that were approachable and trustworthy, and deliver the final product under deadline.

“Because it’s a relatively new technology, it’s not unusual to have users who have never been on virtual reality before, so the voice over was an integral part of the user experience.”
Stephanie Knapp, Producer, Render

Render’s Producer, Stephanie Knapp, knew that there were 100 different languages and thousands of professional voice talent to choose from on Voices. With a tight turnaround, Stephanie thought that being in a different time zone than her account manager might be a barrier to getting the project complete on time.

The Voices account manager turned the time difference between the two companies into an advantage, with Render getting audio files delivered to them overnight, ready for when they arrived at work first thing in the morning. With expertise and knowledge of the voice over industry, Stephanie’s account manager would take into consideration what she was looking for and send links to the auditions of the voices he believed would be most effective for the product. Stephanie and her team could then easily share that list with their client for feedback and a final decision.

“The auditions were sent to us really quickly, and we’d be given approximately five options. We always gave our client the option that if they didn’t like any auditions we knew Voices could source more to choose from. However, that was never necessary as our client was always happy to proceed with one of the original auditions.”
Stephanie Knapp, Producer, Render

MSA launched the VR application at A+A, a global conference for the occupational safety field. Launching the product at this event would get the product in front of 67,000 people in MSA’s target audience.

After receiving the audio files and building the VR environments, Stephanie and her team moved forward with producing the application in a number of different languages, helping MSA better reach a global audience.

“When it comes to the auditions on Voices, there’s always a lot of options to choose from which are easy to access and share. This is great when you have multiple markets and must ensure the right voice for the brand on a global scale. We’ve been working with them for the past four years after a recommendation. The need for voice over talent grew over time and we kept coming back.”
Stephanie Knapp, Producer, Render

After launching the application at A+A, Stephanie went back to Voices for more voice overs in a variety of languages. The account manager curated custom talent lists for each of the different languages for Render to review while the scripts were translated. MSA’s team handpicked the talent for versions of the application that would eventually be showcased in the USA, Spain, Germany, Russia, China, and the UK.