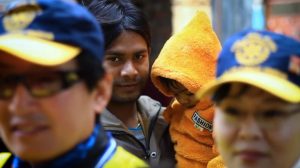 Located in South Africa, Rooftop is a global television, video, and animation company with a strong focus on NGOs like UNICEF and UNESCO, as well as global brands like Coca-Cola, GSMA, and Continental.

The award-winning team at Rooftop has produced several short features for UNICEF that have been seen millions of times by people across the globe, proving that having a database of multilingual voice actors is critical to the storytelling process.

Initially, most of Rooftop’s clients were South African, and the production company found all the voices they needed through local voice over agencies based in their native country.

“Our local agencies did not have a big selection of foreign voice over accents. Over time it became necessary to reach out to a more global company.”
Denna Jones, Executive Producer, Rooftop

About four years ago, Rooftop’s client base expanded internationally. As a result, they needed voice actors who could speak different languages and read with different accents in order to reach a global market. Sometimes it would take weeks to find the right voice talent with the right accent, or who spoke the appropriate language. Sending emails to a handful of agencies and inquiring through word-of-mouth was time-consuming. Local agencies could no longer fulfill Rooftop’s need to communicate to a larger and more diverse audience.

At first, the idea of working with a foreign voice over agency seemed daunting. However, Voices’s prices, customer service, and access to talent who represent more than 100 different languages and dialects gave Rooftop peace of mind.

With just one email to its account manager, Rooftop can efficiently get the voice work they need done by top quality international talent.

An example of this was a recent video for UNICEF highlighting the work of Rotary International in the fight against polio that hinged on finding the perfect child’s voice. A request to the account manager was put in, who immediately replied with 10 options for voice talent that would fit the scope of the project.

After choosing the talent – an American child actor named Hunter Gould – Rooftop communicated directly with him and his team during the recording session to get the right emotion and tone for the piece. By the next day, Rooftop had their completed voice over and inserted it into the UNICEF video to be played for 25,000 people at a Rotary International event, the Rotary Convention’s closing plenary session. The result? An entire crowd of people brought to their feet, applauding the video.

“We’ve found Voices much better value for money than any previous agencies worked with. The vast selection of talent, their availability, and the great customer service keep us coming back.”
Denna Jones, Executive Producer, Rooftop