Rather than using an internal voice, Shopify always looks to Voices to find the right voice for their projects. 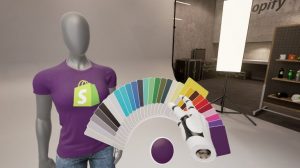 The VR (Virtual Reality) team is new as of 2015, and focuses on building interactive virtual reality experiences, not unlike game development. Daniel Beauchamp is the Head of Virtual Reality at Shopify.

The team recently completed an exciting project; Thread Studio. Thread Studio is a new, interactive way to bring t-shirt ideas to life with virtual reality. Using tracked motion controllers, users can flip through color swatches, lay out designs, and even model creations on fully posable mannequins, all seen through a virtual reality headset. Once users are done creating, they can share photos with friends, get shirts printed and delivered, or sell them online. Thread Studio is the VR team’s first virtual reality application.

Even though the VR team is still new, they had used Voices before. Says Daniel, “Voices is the first site I went to for voiceover work.”

No one on my team has a good enough voice for the stuff we were looking for.

“While there may be some people at Shopify who [have a great voice], my team works on tight deadlines and we didn’t want to have to do a full sound recording setup just to get a few voices.”
Daniel Beauchamp, Head of Virtual Reality at Shopify

Between the past experience of working with Voices and some googling of other options, Daniel and his team members decided to use Voices again for the Thread Studio project.

According to Daniel, virtual reality can be an overwhelming experience for newcomers, especially when they have to figure out how to use the tracked motion controllers to interact with the environment being projected to them. Simply overlaying text popups and instructions in the Thread Studio app could be a bit drab, so the Shopify team decided to use a friendly voice over to explain to the user how to do certain things, instead.

However, as much as Daniel enjoys listening to auditions and different voices, he just didn’t have the time to do it himself for this project. He’s on a small team, and the more he can offload the better and more efficient he can be. This is why he decided to get a voice over actor sourced through Voices’s full service option, Managed Services.

With Managed Services, Daniel didn’t need to spend time looking for voices. He gave a profile to his Voices-assigned account manager, and she went off and rounded up a list of candidates. After a few rounds, the VR team had the perfect voice for their project.

“Script sent one day, get voices back the next. By the end of the week we had a great voice selected, as well as the recordings we needed.”
Daniel Beauchamp, Head of Virtual Reality at Shopify

The voice the VR team selected for Thread Studio was none other than Bryarly Bishop, an LA-based pro who recorded the project remotely.

A lot of thought was put into the selection of the voice over actor. “Our app is not a commercial, and so it shouldn’t sound like one,” says Daniel. “A lot of the voices we had heard sounded too much like a radio announcer trying to sell you something. The environment of Thread Studio is a virtual photo studio that a friend is letting you use. Therefore, the voice over should represent that friend, and sound like they’re giving you, the user, direct voice instructions on how to use the space. This is why it was important to select a voice that sounded very natural and genuine. Bryarly’s voice matched that scope perfectly.”

The tutorial for the app, which teaches users how to work it, is brought to life with Bryarly’s voice. Those who are new to VR technology will have her voice in their ears, walking them through the commands and how best to use VR to create their perfect shirt.

Martin Risby covered the app for his VR YouTube channel. In his review of Thread Studio, Bryarly’s voice is a prominent part of his positive experience:

The tutorial – and Bryarly’s voice over – can be experienced in full by downloading and playing the app, found here. A HTC Vive VR headset is required for the app.

“This is the second project the VR team at Shopify has used Voices for, and the results are fantastic.”
Daniel Beauchamp, Head of Virtual Reality at Shopify

With the app now completed and ready to be experienced, users can download Thread Studio for free for the HTC Vive on Steam. Download the app HERE.

For more information on Thread Studio, check out the Medium article on the technology HERE.