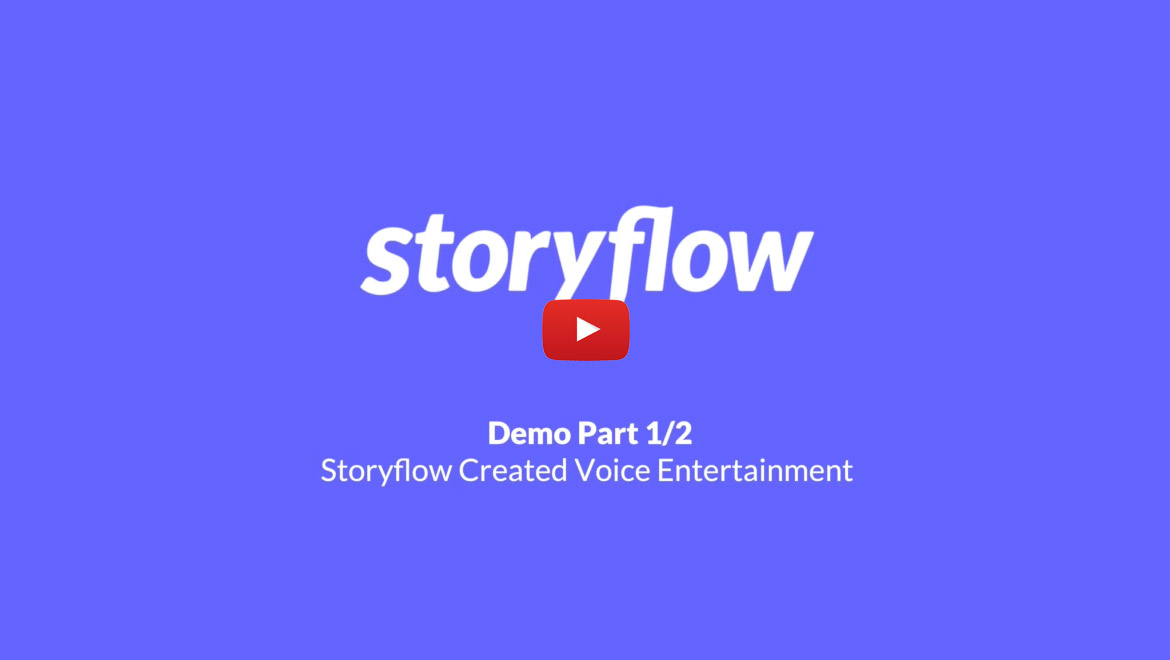 families reached on a weekly basis

“Voices.com made it easy to find quality talent quickly, with the actors/actresses responding in a very timely manner. The ability to have them demo a part of the script was amazing.”  – Braden Ream, CEO & Co-founder, Voiceflow Inc.

Voiceflow is a platform that allows creatives and content owners to create, distribute and monetize interactive voice entertainment on smart speakers without having to write code or hire a team of engineers. With the use of smart speakers continuously rising, Voiceflow provides creators with an easy-to-use solution to efficiently build content for devices like Alexa and Google Assistant. The platform hopes to become the spot where people find the voice entertainment they love.

Voiceflow’s first genre of entertainment is choose-your-own adventure-style interactive games for children. The games allow families to play together by interacting with the smart speaker and making decisions about the direction of the characters in the audio story.

Before using Voices.com, Voiceflow used alternate platforms to find voice over talent. However, even with those options, they were still having difficulty finding a consistent stream of high quality voice over delivery. Sourcing professional talent with the vocal qualities that best appealed to their unique audience was also proving to be a challenge.

As well, Voiceflow wanted the option to have voice over talent audition using their script, rather than having to listen to generic demo reels that failed to help them determine if a particular talent was able to match the style and feel of their project.

“We were finding it hard to find quality talent. We also wanted to get a demo of the talent auditioning for our specific project, not just a demo reel.”

It was while creating the short interactive bedtime story series for children titled “Tiny Tales,” that the Voiceflow team realized just how important it was to find the right voice that would engage and delight a younger listener. To achieve that, they would need to engage a more reliable option to find the professional talent that the project required.

When casting for Tiny Tales, Voiceflow decided to turn to Voices.com for help.

The series was designed to help children get excited about going to bed, while remaining educational, relaxing and screen-free, making the right storyteller to keep this younger audience engaged vital for the success of the project.

Voiceflow was looking to produce and deliver five stories in five days. With Voices.com, the team was able to create a job posting on the same day their script was finalized. They were then able to carefully review the incoming list of auditions, a feature that allowed the team to speed up the process so that they could meet their deadline. They were also able to use the time to focus primarily on reviewing high quality and suitable auditions directly on the Voices.com platform, rather than scouting for voice actors independently like they used to.

“With Voices.com, were able to put out a job posting and not have to do our own sourcing like we used to on other platforms. This really helped us speed up the process and focus on reviewing quality demos instead of having to find them ourselves.”

Braden Ream, CEO of Voiceflow, describes the entire process on Voices.com as fast and efficient. The result of using a professional voice actor on the Voices.com platform was a near doubling of their audience engagement and an overwhelmingly positive response from their users. Braden states that by using Voices.com for Tiny Tales, they were able to successfully curate specialized content to an audience they had not previously served before.