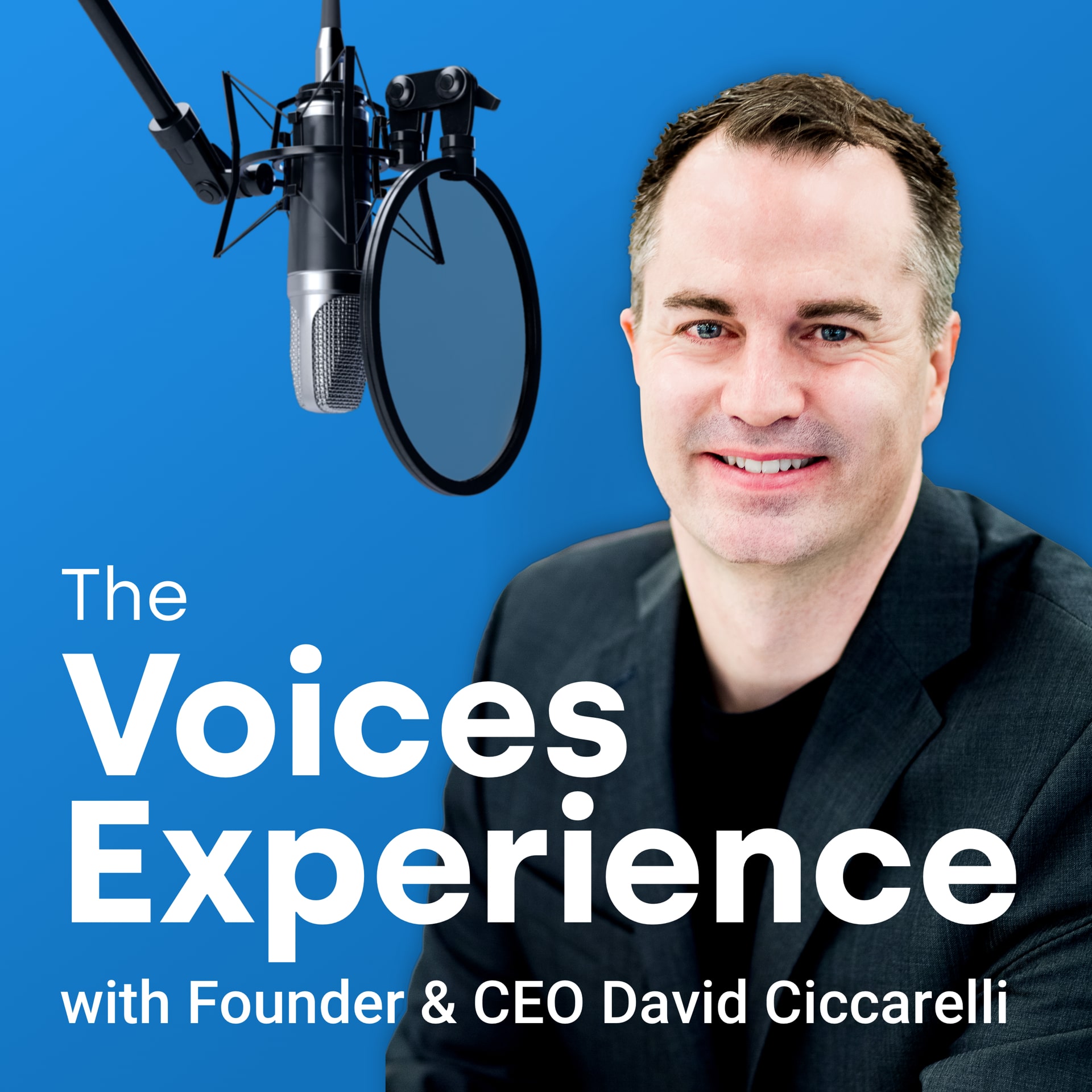 Sound has had the power to captivate since the dawn of time. David Ciccarelli, founder and CEO of Voices.com, transformed his passion for sound into his full-time career. In the first episode of our new podcast, get to know David as he chronicles his childhood fascination with music and the human voice, recounting how it inspired him to launch what would become the world’s definitive destination for professional voice talent. In his own words, listen as David takes you behind the scenes to explain the simple idea that Voices.com is still pursuing today.

Hi, it’s David. Thanks for joining me on the show today, I figured one of the best places to start is getting to know your host. And that’ll be me, I’m going to be your guide and you’re the hero in this journey, this experience. So to that end, I figured I’d share some earliest memories about voice and sound. For me growing up, I was always fascinated with sound, I’m sure many of you were as well. My mom had this old record player, I’d listened to spoken word recordings and of course music by the Beatles mostly. And then my dad had this short wave radio where I could tune into radio stations from around the world, it was almost like reaching an unknown or un-found people group. And I could listen to these foreign languages often being spoken. I learned to play piano and drums. I actually got some recording equipment that I was able to borrow from our church, and I started recording on my own.

And it wasn’t before long where when I graduated high school, I was looking for what to do afterwards. Would I go to college or university? And I found a school called the Ontario Institute of Audio Recording Technology, OIART is how it’s pronounced. And it is just that, a school that specializes in the recording arts. And it’s there where I learned to record and edit and produce music and sound and voiceover. And so that’s really my educational background, is that technical aspect of it. During that time at OIART, one of the assignments was actually to put together a career plan of what you would do upon graduation. And so I actually devised a plan of building out my own home studio. Actually it was a mobile recording studio, this was in 1999, I know I’m dating myself here.

And the best mobile recording studio equipment I could find at the time was for the first reality TV show survivor. And I looked up on the forums to figure out what kind of equipment they had. And I really just mirrored exactly what the location sound recorder had. It was a Pro Tools setup, which those of you that are wondering, that’s what I’m using here today. And so with that recording equipment, my big idea was to be a mobile recording engineer. I’ve recorded bands at events, live shows, churches, political events, anytime that they needed professional quality recording onsite, that’s what I would offer. So upon graduating, I opened up a small recording studio called The Flying Disc, and that studio was here in London, Ontario, just right by The Grand Theatre, our local performing arts center. I actually got my name in the newspaper on my birthday of all days, just announcing the opening of this new recording studio.

It turns out that Stephanie’s mom read that article. And for those of you who don’t know, Stephanie is now of course my wife and the co founder of Voices.com as well. Well, Stephanie’s mom read that article. She left it for her on her bed and encouraged her to come down to the studio and get her singing repertoire done. You see, Stephanie, she’s a classically singer. She’d sing at weddings and funerals and special events. And I think maybe her mom was looking for her to have some marketing collateral, that she could get her next gig. So Stephanie comes down to the studio and we really hit it off. But because of that same newspaper article, there were other small businesses that wanted some recordings done. One of them was a hair salon, another one was an event management company, and both of them actually wanted a female voice.

So I figured, well, I can’t do that, why don’t I give Stephanie a call? I just met her the other day. My call to her was really, “Hey, I’ll be the engineer and you’ll be the voice talent, and we’ll split the money 50-50.” And that’s how it all began. We started doing voiceovers with Stephanie as the talent and me as the engineer, for a while we put up a pretty primitive website actually. We actually went to the local public library, took out a book called Web Design For Dummies, and taught ourselves how to code our first website. And it was basically just a brochure website, but that site soon attracted freelance voice talent from all around North America. People who spoke French and English and Spanish, people who did cartoons and animation, those who specialized in doing just commercials and promo work. Now, if those terms are new to you, I’ll explain all that in the upcoming episodes, but just imagine there’s a whole world of voiceover opportunity and we kind of just stumbled upon it.

Now, this talent that found the website, they reached out to us and said, “Hey, I noticed that you don’t have somebody who sounds quite like me, or has a service that I can offer. Could I be listed on your website?” And we figured, sure. So we started adding links to their own website, or if they had an audio clip, we could actually upload that so you could listen to their voice right away. Now of course, that naturally attracted those clients, those people who are looking to hire the talent, and they would soon find the site as well. And they would say, “How do I get in touch with so, and so can you connect me with them?” Of course we always said yes, but that actually was the really big idea. What if we didn’t do any of the production ourselves? What if instead we pivoted? Rather than being a recording producer and engineer in a studio, why don’t we sell all that equipment and reinvest into a website that brings these two parties together?

And that’s precisely what we did. It’s really been the same idea from the get go, Voices.com is what we often call an online marketplace. And what that means is that you’re connecting the buyers and the sellers. In this case, the buyer being that client and the seller being the voice talent. So that’s how it all began. I figured it would be a good place to start this podcast. So with a few dozen voice talent listed on the website and clients looking to get in touch with them, we really felt that there was a good business opportunity here. Our pitch to the talent was, in exchange for a small annual membership fee, which at the time I think was just $49. We said that we would effectively market them online. Something that was actually pretty difficult to do then. Tthis is before the days of LinkedIn where you could create a resume, or sites like Wix where you can put up a website pretty quickly, or even WordPress. There was none of that.

So it was pretty much a novelty to be able to have your own page where you could feature audio samples of your voice, as we call them now, voiceover demos. And we weren’t just going to effectively market the talent online by sending new job opportunities every day. In addition to that, we were going to provide great customer service. We had a toll free phone number installed in our small apartment at the time. It would ring day and night and we would always offer help whenever we could. And that’s the same toll free phone number that we have in our office today.

Thank you for calling Voices.com, the online marketplace that connects you with professional voice talent.

So it was really just a simple idea of connecting needs and wants together. The talent need to find new opportunities for work and the clients were wanting to hire somebody for a particular project. That’s really the essence of an online marketplace.

Today we have a much bigger vision. We believe that the human voice can inform, entertain, and inspire. Voice makes our world a more positive and accessible place. Our mission is to create the definitive destination that connects people with professional voice talent. So you might be asking, why do a podcast? Well, over the last couple of months, I was able to speak with 100 of our top talent. These are people from around the world, they speak different languages, they have different areas of expertise, and they really inspired me to be honest with you, not that I’m looking to become a talent. I found that during those conversations, I learned a lot, but there was also a lot of advice that I could give. Advice about the industry, about where it’s going, about new ideas, about the things that we’re working on Voices.com.

There’s of course, lots of questions about things I felt like I could clear up. Now of course, doing thousands of phone calls like that would take a while and maybe a podcast is just a more efficient and effective way to do that. Perhaps that’s the engineer in me. So that’s what I have for you today, I figured I’d just introduce myself, share those earliest memories about growing up around music and sound, and then how I moved into professionalizing those in with a formal education. Then finally, how Stephanie and I started Voices.com. In our next episode, though, I’m going to talk about the key players within the space, what each of their roles are, how they interact with one another, and that will at least give you my perspective. All right, well, that’s enough for today. Send me your questions or comments to [email protected], and be sure to subscribe on iTunes, Spotify, or Google Play to catch the latest episode. Until then use your voice to inform, entertain and inspire the world.

David Ciccarelli
David Ciccarelli is the Founder and Chief Executive Officer of Voices. As CEO, he is responsible for setting the vision, executing the growth strategy and managing the company on a day-to-day basis. He's been a finalist of the EY Entrepreneur of the Year Award and a Canadian Innovator Award. He often writes about his entrepreneurial journey in the Wall Street Journal, Entrepreneur, Forbes and for M.I.T. Executive Education. He graduated with honors from the Ontario Institute of Audio Recording Technology and is a graduate of Harvard Business School.
Connect with David on:
Facebook Twitter LinkedIn Voices
The Voices Experience Trailer
Understanding the Business