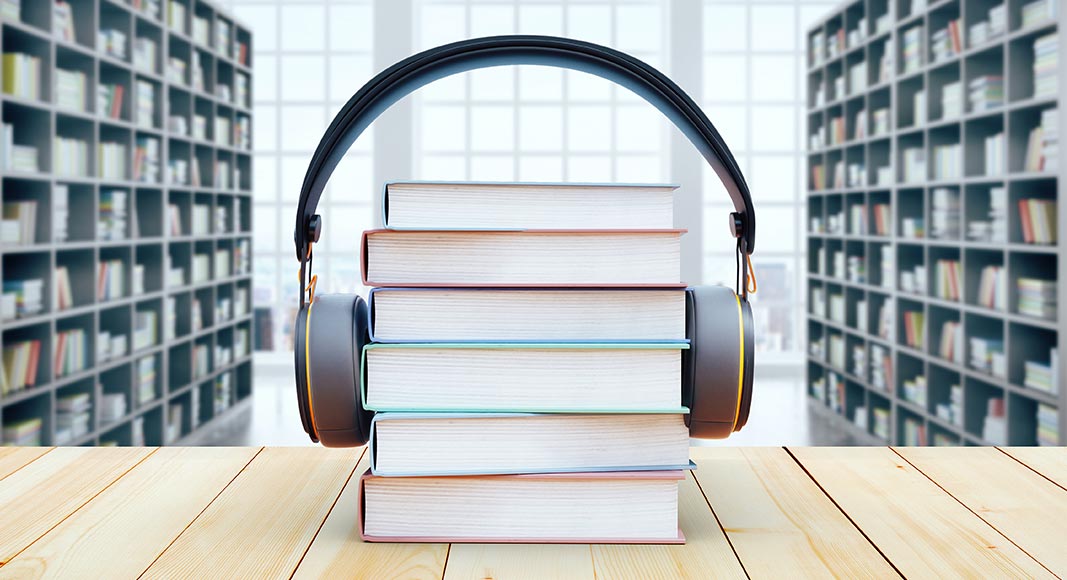 The Evolution of Audiobooks: From the First Audiobook Recording to Digital Downloads

The creation of the audiobook medium has dramatically shaped the way that the world can access valuable information.

For instance, the invention of audiobooks has opened the door for more and more people to benefit from the written word – including those with visual impairment, and those who would otherwise not have the time or ability to read.

Whether the content is entertaining or educational, or anything in between, it’s not uncommon for many of us to capitalize on ‘downtime,’ such as a lengthy commute, or a few hours spent doing household chores, by putting on an audiobook.

For anyone wondering how the industry got started, this foray into auditory recording of written works is for you.

The Precursor to Audiobooks, An Aluminum Disc and Battery-Powered Turntable

Audiobooks have a unique and fascinating history. In 1933, anthropologist J.P. Harrington, drove the length of North America to record oral histories of Native American tribes on aluminum discs using a car battery-powered turntable. Now, in the 21st Century, the definition of books and publishing is evolving as technology advances and the consumer demands change. Audiobooks allow avid readers to multi-task in today’s hectic world. Consumers can listen to an audiobook as they commute, exercise, or cook. At the same time, audiobooks preserve the oral tradition of storytelling that J.P. Harrington pursued many years ago. Narration, sound effects, and music can complement the reading experience.

The Very First Audiobook Was Recorded in the 1950s

In January 1952, Barbara Cohen and Marianne Roney, sat down with Dylan Thomas in the bar of the Chelsea Hotel and persuaded him to record some of his poetry. Spoken word records were almost unheard of at the time.

Cohen and Roney knew that Thomas’s poetry was shocking, moving and important, and that they wanted to record it to preserve the sounds. With the promise of $500, and much coaxing and cajoling, a recording session was arranged. Thomas selected the poems, writing the list in his tiny round letters in Miss Roney’s appointment book.

Caedmon Records was born the next week, named, appropriately enough, for the first poet to write in the native language of Old England. Then, on February 22, Peter Bartok, son of the composer Bela Bartok, had set up his equipment in Steinway Hall to do the recording.

Thomas began the session with Do Not Go Gentle Into That Good Night.

Bartok had perhaps expected a quavery poet’s voice, but instead he had to adjust the microphone for a symphonic recording to accommodate Thomas’s sonorous voice.

To fill the other side of the record, Thomas recorded a story he sold to Harper’s Bazaar, A Child’s Christmas in Wales. This recording established the story as a classic. Today, it is Dylan Thomas’s most widely known work and, as a model of translucent prose, stands as an everlasting testament to his greatness as poet and bard.

Audio Format Reaches a Turning Point in the 1980s

One of the more remarkable turning points was the 1980s, with the longer audio format of cassette tapes and the inexpensive, portable Sony Walkman becoming prolific at the time.

With the accessibility and format of recordings now able to more adeptly serve the audiobook industry, by 1984, there were 11 audiobook publishing companies.

However, it was Brilliance Audio who created waves in the industry after inventing a way to record twice as much on cassettes. This meant audiobook publishers could now produce affordable unabridged editions of their most popular books.

Just one year later, there were twice as many audiobook publishers in the market. New major book publishers, such as Harper and Row, Random House, and Warner Communications joined in the distribution of audiobooks.

Also in the ‘80s, a number of events happened that cemented audiobooks as a profitable market.

Leading the scene was the development of the Audio Publishers Association (APA), a professional non-profit trade association established by a group of publishers to promote awareness of spoken word audio and provide industry statistics to the public and its members.

In the late ‘90s to early 2000s, new compressed audio formats and portable media players furthered the popularity of audiobooks with consumers.

Perhaps unsurprisingly, by around the mid-’90s, the audiobook industry grew to a whooping 1.5 billion dollars per year in retail value. Not bad for something that started out as experimental curiosity. The audiobook industry was lifted to new heights when the APA introduced the Audie Awards, which would become known as the ‘Oscars of spoken word entertainment.’

In 1997, Audible.com pioneered the world’s first mass-market digital media player, named ‘The Audible Player,’ which sold for $200 and was advertised as being ‘smaller and lighter than a Walkman.’

As digital technology grew there was a movement in digital audiobooks which allowed consumers to access their audiobooks instantly from a growing number of online libraries. Audible.com was the first to establish a website (1998) where digital audiobooks could be purchased and downloaded.

The 2000s Leverage Podcasts to Bring Audiobooks to the Masses

In 2005, Montreal-based writer Hugh McGuire posed a question on his blog: “Can the net harness a bunch of volunteers to help bring books in the public domain to life through podcasting?”

From that notion he created of LibriVox, a website where volunteers select books in the public domain (royalty-free books) to narrate by themselves or as a group of narrators. By the time 2012 rolled around, LibriVox carried a catalogue of over 6,244 unabridged books and continues to produce dozens of titles per month.

You can still become a volunteer narrator at LibriVox. This platform provides a good way for up-and-comers to practice the art and skill of audiobook narration, as well as test drive the niche to see if it’s right for your voice acting career.

In 2003 and 2004 cassettes were phased out and replaced by CDs as the dominant format for audiobooks, but the CD steadily declined as digital technology became more accessible and the popularity of audiobooks continued to grow.

Did you know that one of the biggest, most diverse, and lucrative industries today is the consumption of audio books?

Audible, a company that sells audio books, has been profitable in this industry since 2003 and more than doubled its number of subscriptions (to 237,000) and its annual revenues (to an estimated $63 million) last year (source, Business 2.0 magazine).

Once Steve Jobs of Apple Computers downloaded “Lincoln at Gettysburg”, he was hooked on Audible, introduced the service at a Macworld conference (2003), and played a recording of E.B. White narrating his beloved novel, “Charlotte’s Web”. Following Apple’s lead, many Mac fans quickly adopted the new trend, downloading audio books to their iTunes, and most recently, to their iPods.

Michele Cobb, President of the APA, said that “The future of audiobooks is our industry continuing to do more of what we do best – make amazing performances from excellent content. We’ve been extremely good at evolving, embracing new formats and growing. I have no doubt that we will continue this and when the next big thing in digital makes its way to the surface will be riding the wave at the front.”

You may have noticed that audio books are entering into the mainstream regarding literary consumption. Books on tape, spoken word recordings, storytelling based upon oral tradition.

While it’s lovely and whimsical to think about the endless options to satisfy us as consumers, the marriage of the spoken word and digital recording for audiobooks is currently a $900 million dollar industry. In 2019, Forbes reported that U.S. audiobook sales neared $1 billion, growing 25% year-over-year.  The audiobook publishing industry has likely passed the $1 billion dollar mark in 2020.

The founder of Audible, Donald Katz, in an interview with Business 2.0, shared his insight on where this market is headed. The demand for audio books has ballooned, much aided by the presence of the iPod. People are taking their music with them wherever they go, are listening to podcasts, so the ability to take your favorite book with you in digital form via an MP3 player isn’t a big stretch of the imagination.

Think of it as theatre of the mind. It’s like floating off into an oasis of well crafted words flowing through the mouth of an excellent orator – it takes limited effort to listen, enjoy, and digest the plot, objective, or thematic material of an audio book.

As voice actors, narrators and storytellers, you too can have a piece of this pie. After all, the entire concept of this product is built upon using the human voice to breathe life into the written word, and now, this is an on-demand service.

Books, magazines, newspapers, speeches, interviews, how-to manuals, and also the localization of these is now the fastest growing market in the world regarding the use of voice-overs.

In 2020, you can take your favorite books anywhere now on an iPhone, Android or your preferred brand of smartphone. You’ll also be able to take your pick between reading the printed word and listening to the spoken word in many cases. With Audible at the wheel and competitors creeping up quickly, there may be more audiobook titles available online than printed books stocked in libraries!

Are You Looking for an Audiobook Narrator (or a Few Narrators?)

Voices audiobook narrators hail from over 160 countries and speak a wide range of languages, dialects and accents. Whether you’re completing your first recording, or a translated version, you’ll find the perfect voice on Voices.

Get started on Voices today – signing up for a free account takes less than two minutes! 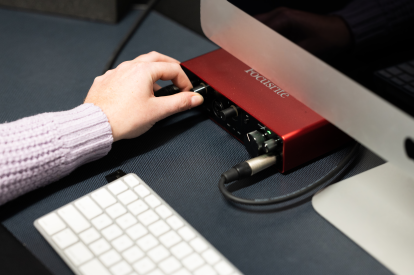 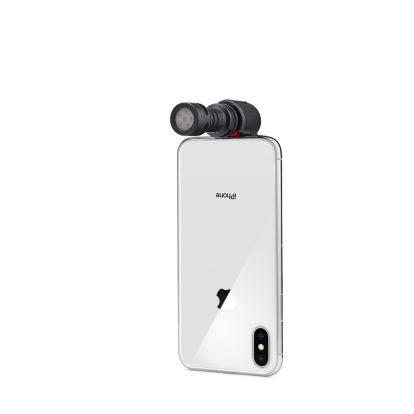 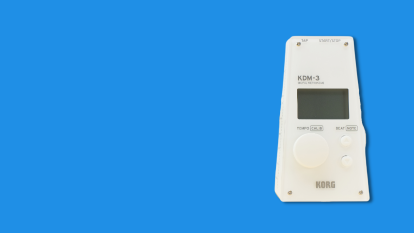