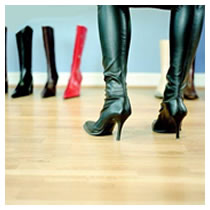 How Do You Get Into Character?

Before you get in front of the mic, do you have anything special that you do to get in the ‘zone’?

Even the VOX Talk Podcast has a story to tell! Share your “pre-game” rituals and recording session routines with your friends at VOX Daily.

I thought of writing this post a couple of months ago when we started the VOX Talk podcast (18 episodes and counting – yippee!) because at that time, I had instituted a recording session ritual for myself. Before I recorded every episode of the VOX Talk podcast, I would do all of the usual things (warm up, drink water, eat an apple (thanks Julie), rehearse, etc.), but to me at the time, the real clincher for a great session character-wise was all in the footwear.

The routine was simple. Put on my boots, sit down, pick up the microphone, hit record and click back to my Word doc with the show notes. For a number of episodes, I recorded wearing my podcast boots (don’t laugh, that’s what I called them!), and found that they helped me to ease into hosting the podcast on psychological and artistic levels.

The boots also gave me:
• A mix of inspiration and extra confidence
• Something unique that I only associated with recording
• Artificial height. When you’re 5’2″, you’ll take whatever you can get!

Regardless of what I thought the boots did for me, one night, I didn’t feel like wearing them. I think it may have even been when we recorded the Voicey Awards.
Bryan Cox said it was a pity that I didn’t mention the dress I was wearing in the podcast. Well, I was wearing pants and a shirt, not a gown created by Valentino, and to have admitted then that I was also bootless (in stocking feet) on top of that would have been too much!

Since that fateful night, I have not worn the boots during recording sessions for the podcast, and truth be known, I don’t need them. Everything that I had inside me was there already, and not because of the boots. Until now, only a handful of people were privy to the fact that I was wearing the boots to get into character. Now, it’s out in the open! I’m hoping that my story will encourage you to share any silly or meaningful recording session preparations or rituals you observe.
What do you do that makes a recording session special for you?
Cheers,
Stephanie