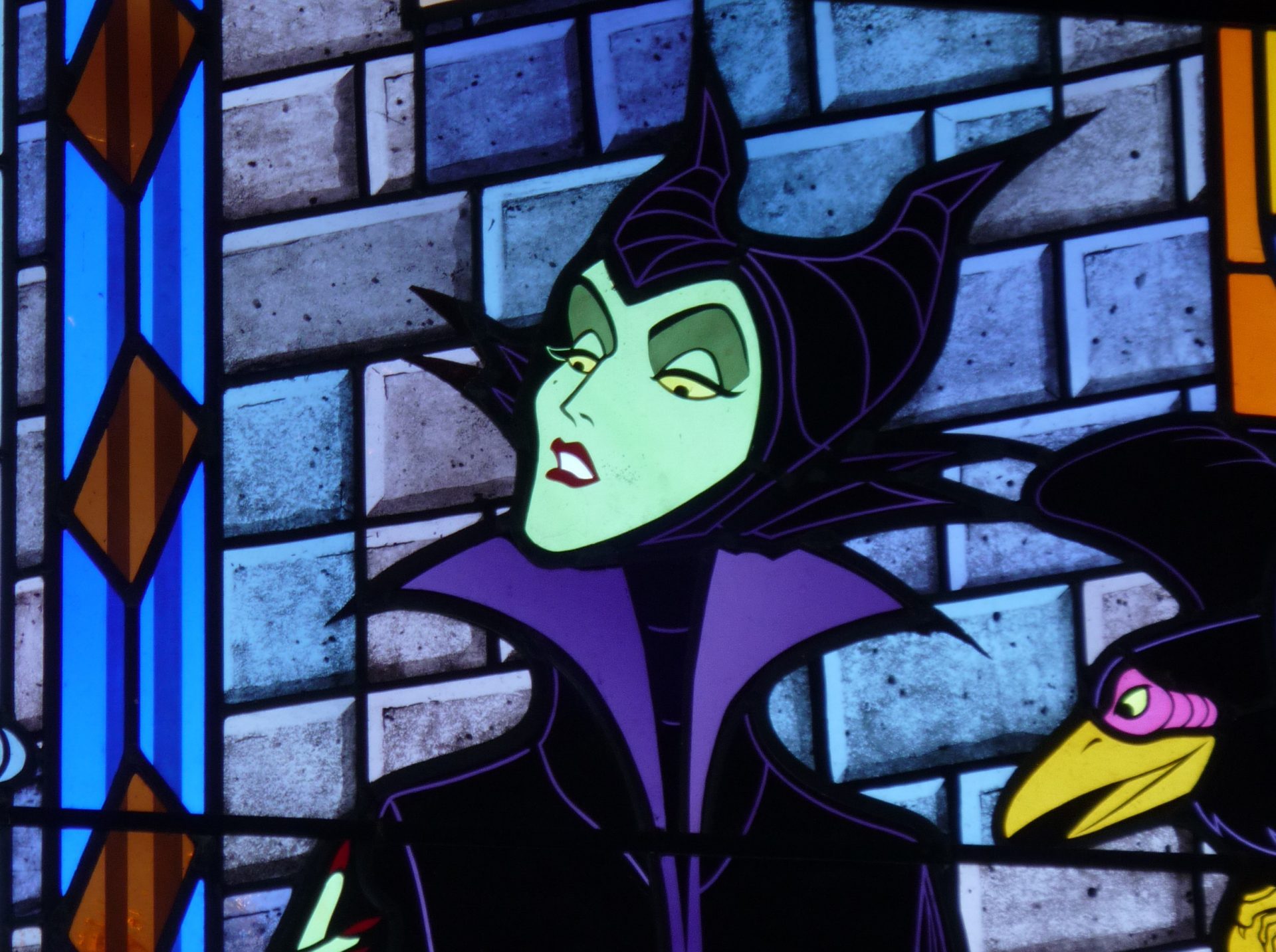 Who Are The Top 10 Disney Villains?

Villains are all the rage these days.

Whether it’s ‘Cruella’, ‘Maleficent’, or the live-action remakes of ‘Cinderella’ and ‘The Little Mermaid’, it seems bringing Disney villainesses to life is en vogue.

Maybe it’s because we all know the origin stories of our favorite Disney heroes and writers are running out of stories to tell.

Or maybe Disney wants us to have more sympathy for their villains!

Whatever the reason for the uptick and trend of villains getting the love, we’re here to break down the top ten Disney villains of all time.

1. The Evil Queen (Snow White and the Seven Dwarfs)

The queen with too many nicknames: The Evil Queen, the Wicked Queen, Queen Grimhilde, or just the Queen.

The main villainess in Disney’s 1937 ‘Snow White’ remains, one of, if not the most recalled Disney villain.

The Evil Queen’s character is based on the Evil Queen from The Brothers Grimm’s 1812 fairy tale by the same name.

Just like in the Brothers Grimm classic, the Evil Queen is a vain, sadistic and just downright cruel witch who owns a magic mirror and is obsessed with remaining “the fairest of them all”.

She becomes enamored with the beauty of her stepdaughter Princess Snow White and leads her to plot the death of Snow White.

Hades literally means “the unseen one”, and its origins date back to Greek Mythology, where they believe Hades to be the god of the underwood and dead.

So in true Disney fashion, they took this notoriously dark and morbid character from iconic folklore, and made it palatable for a family-friendly audience.

It was Woods, spry, fast-chatting and sly car-salesman-like approach to the voice over role of Hades that made the character such a revered Disney villain.

In the movie ‘Hercules’, Hades has a plan devised against his oldest brother Zeus, the ruler of all other gods. Hades plans to take over Mount Olympus, but a prophecy foretold that a hero (Hercules) would thwart those plans.

Sid is the main villain in Disney and Pixar’s ‘Toy Story’ which was the first full-length animated feature film and was released in 1995.

The nasty pre-teen was feared amongst all toys for doing horrible things to them, instead of playing and taking care of them.

Sid was said to be influenced by a childhood friend of Ryan Newbert (one of Pixar’s animators). This friend was known to disassemble toys and use the parts to build strange creations, just like Sid.

Jafar the Sorcerer is the main villain in ‘Aladdin’ which was Walt Disney Pictures’ 31st animated feature film.

Jafar was created by Disney animators Ron Clements and John Musker and was based on the villain by the same name in the 1940 live-action film ‘The Thief of Bagdad’.

Many of the characters in the 1992 film ‘Aladdin’ were borrowed from ‘The Thief of Bagdad’.

Jafar is the grand vizier of Agrabah, which meant he was the Sultan of Agrabah’s most respected advisor. Jafar is secretly an evil sorcerer who plots to obtain the Genie’s magic oil lamp from Aladdin and rule Agrabah.

Voice actor Jonathan Freeman voiced Jafar in the original ‘Aladdin’, as well as the sequel ‘The Return of Jafar’.

Maleficent is another classic Disney villainess.

The self-proclaimed “Mistress of All Evil” was introduced to audiences in the 1959 animated film, ‘Sleeping Beauty’.

The character was created by Marc Davis, who was an animator at Walt Disney Studios and one of Disney’s “Nine Old Men”, the famed core group of animators.

Maleficent is an evil fairy, who makes her claim to fame, after not being invited to a royal Christening. She puts a curse on the Princess Aurora to “prick her finger on the spindle of a spinning wheel and die” before the sun goes down on the Princess’s 16th birthday.

Maleficent was voiced by Elanor Audley, who also voiced another Disney villainess on our list, Lady Tremaine, the Evil Stepmother in Cinderella (1950).

Jolie returned in the role, when the sequel, ‘Maleficent” Mistress of Evil’ was released in 2019.

Cruella de Vil was the main character in many 90s kids’ worst nightmares.

The glamorous and pompous British fashion designer and heiress came to life in Dodie Smith’s 1956 novel, ‘The Hundred and One Dalmatians’. Five years later, she made her animated film debut in Disney’s 1961 ‘101 Dalmatians’.

De Vil has become an iconic symbol of the merger of vanity, greed and evil, which has molded the character as a sort of pop culture icon in more recent years.

As her story goes, de Vil kidnaps 15 puppies from Dalmatian Pongo, to turn them into fur coats. She is obsessed with the young Dalmatian fur because it sells for more in the fur fashion industry.

Ursula, (you guessed it) is also a witch.

But hold on, this witch is no ordinary witch, she’s a sea witch!

Ursula was introduced to the world in Walt Disney’s 28th Animated Feature Film ‘The Little Mermaid’.

This evil sea witch offers Ariel, the mermaid princess, a temporary chance to become a human (with legs!) so she can win over Prince Eric. But Ursula tries to ruin Ariel’s dreams so she can take down King Triton as the ruler of the oceans.

Ursula is based on a sea witch from the 1837 fairy tale ‘The Little Mermaid’ by Hans Christian Andersen.

Melissa McCarthy is slated to play Ursala in the live-action remake of ‘The Little Mermaid’, which is set for a May 2023 release.

With a name like Scar, you know this guy is going to be a Disney villain.

Scar is the main villain in Disney’s ‘Lion King’ series, and was created in 1989 by Disney writers Irene Mecchi, Jonathan Roberts and Linda Woolverton.

The shifty lion made his big screen debut in ‘The Lion King’ in 1994, and was voiced by iconic British actor Jeremy Irons.

In ‘The Lion King’, Scar is introduced as the power-hungry younger brother of Mufasa, the ruler of the Pride Lands. Scar is thrown for a loop when he is replaced by Mufasa’s son, Simba, as the next-in-line for the throne. The slippery Scar then leads an army of hyenas to take the throne by force, killing Mufasa and forcing Simba into exile.

Hook was created by J.M. Barrie, a Scottish novelist and playwright, who wrote the stage play ‘Peter Pan’, which premiered in London, England in 1904.

The Captain made his debut in that original stage play as well.

Captain Hook is a pirate captain of the Jolly Roger ship and is known for being afraid of the crocodile that eats the hand he had cut off by Peter Pan. He receives the name Captain Hook after he replaces his hand with an iron hook.

Disney’s version of hook in the animation film was said to be more of a comical villain than the original Hook. Disney’s Hook was modeled after a Spanish King and is more cowardly. The character would cry out in fear when confronted with the crocodile.

Tremaine set the tone for evil Disney villainesses in this era. She treated Cinderella (her stepdaughter), more like a servant than a daughter. Tremaine instead focuses all of her attention on her two daughters, Drizella and Anastasia.

Wicked Stepmother is based on the character from the original English language version of the ‘Cinderella’ fairy tale by Charles Perrault.

In 2015, Disney released a live-action version of ‘Cinderella’, with Lady Tremaine being played by Cate Blanchett.

Think you can do a great Captain Hook, Lady Tremaine or Cruella de Vil impersonation? Tag us on TikTok @voicesofficial to show us your best Disney villain voices!