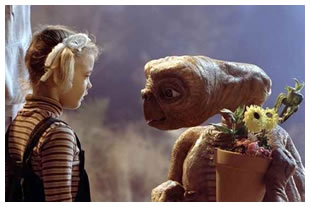 Any movie buffs out there?

Recently I heard some interesting facts about the voice artist who recorded the voice of E.T. in Steven Spielberg’s film E.T. The Extra Terrestrial (1982).
Who provided the voice? Why’d they get chosen? How much were they paid?
Find out in today’s VOX Daily!

The Voice of E.T.

Story ideas come from all over the place and this particular one was presented to me by one of our staff at Voices, E.J. Debenham. E.J.’s son, Austin, came across some tidbits about the voice of E.T. that I thought you’d find interesting. The following E.T. trivia is confirmed on IMDb.

American film actress, Pat Welsh (1915-1995), was cast as the voice of E.T. (uncredited) in the 1982 film E.T. The Extra-Terrestrial. At the time of the film’s release Welsh was 67 years old.
Over the course of her career, Welsh was cast in three films, one of which was Star Wars: Episode VI – Return of the Jedi (1983), another uncredited role voicing the character Boushh.

How Pat Was Cast

Pat Welsh was a chain smoker whose raspy voice gave E.T. its signature sound. She smoked two packets of cigarettes a day. Sound effects creator Ben Burtt overheard Welsh speaking in a camera store, liked what he heard and invited her to audition for the part.
Welsh did the majority of the voice work for E.T. which was used simultaneously with Debra Winger.

According to IMDb, Pat Welsh worked on the film for nine-and-a-half hours recording her part and was paid $380 by Burtt for her services.

If you love movies and keep track of neat facts about voice over roles in film, I’d love to hear from you! Be sure to comment below.
Best wishes,
Stephanie