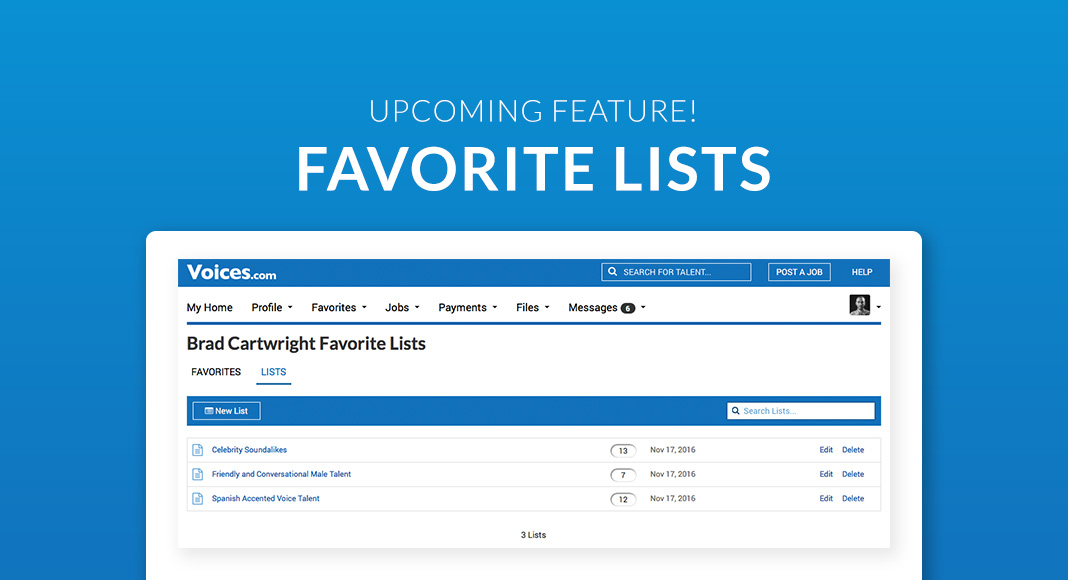 Ever wanted to save a particular demo to a list instead of just favoriting a talent profile?

In our latest release, we’ve begun laying the groundwork for clients to not only save their favorite talent demos but also create lists in the next upcoming release that organize the sort of voices they’re interested in!

Discover what’s new about Favorites and how you will be able build out your own lists for personal use or to share with collaborators now.

Up until now, whenever you ‘favorited’ a voice actor, it meant that you would actually favorite that particular person’s entire profile. While this was a good tool for remembering the voices actors who you liked or enjoyed working with, it didn’t tell the story of why you liked them or what aspect of their talent you were most impressed with.

With this release you can now favorite a voice actor’s individual demo that piqued your interest, and soon, you will be able to add them to separate lists that will mean you have so much more control over your voice casting experience.

Starting today, you can begin the exciting quest of creating your own lists with all of the favorite demos matching your needs. Favorite demos today, and the ability to divide those favorites into lists are coming up next.

If you hire talent with a certain accent, make a list featuring talent who have that accent. Give lists their own custom names, exactly how you want to see them. Imagine how much simpler it would be to draw upon a list that you’ve already vetted.

How Will I Be Able to Use Lists?

Do you hire bilingual voice actors and want to easily remember who your English and Spanish speakers are? Make a list!

It could be that you enjoy working with voice actors who can do impressions of celebrities. Make a list for soundalikes or more specific lists by language, gender, and region.

The beauty of these lists is that not only can you make them, but other users on your account can too! Lists generated by you, your Administrators, and your Managers are all mutually accessible to help save you time when finding the right voices to audition and work with on Voices.

Lists Will Make Online Casting Better Than Ever

As they say, sharing is caring. When you create your lists and others create theirs, suddenly you’re able to tap into a crowdsourced discovery of new voices curated by your colleagues using Voices. In one click, you’ll get a picture of why others found particular voice samples to be noteworthy and awesome.

Voice Over
What Is the Best Voice Recording Software in 2022?

When searching for voice recording software, should you pay or use a free program? Here's a roundup of the top 8 audio editing software.

Voice Over
How to Find Voice Over Work Online in 2021

Your definitive guide to finding voice over work online. Learn what to look for in a job posting, how to submit winning auditions, and more. 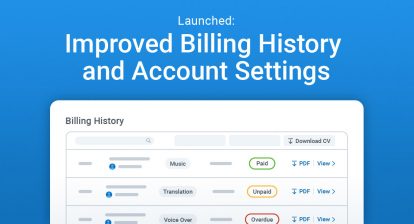 We’ve listened to what clients' needs are when it comes to billing and payment, and we are pleased to share improvements to these processes with you.