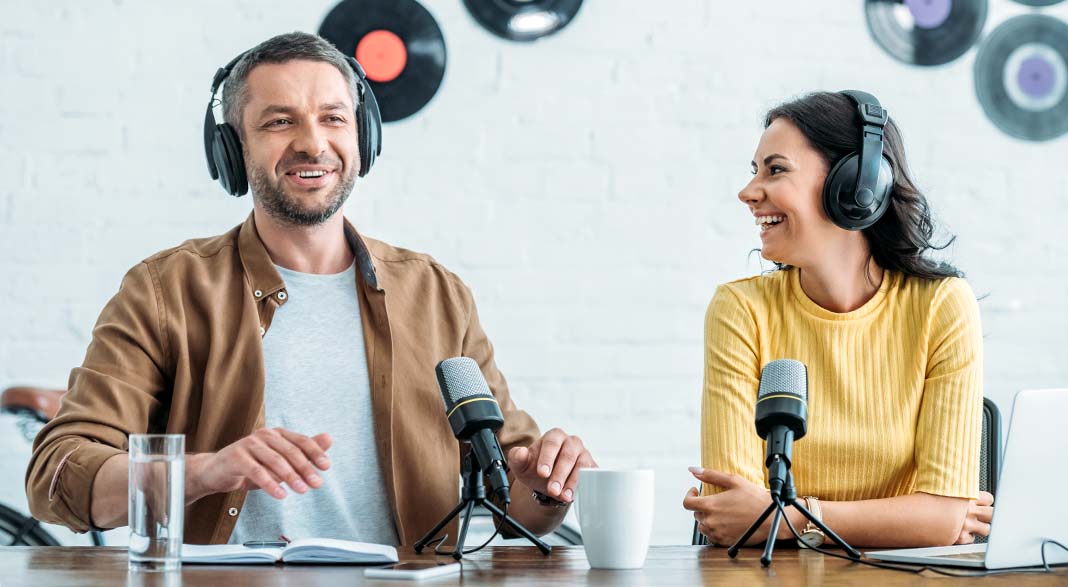 The Complete History of Podcasts

The history of podcasts unfolds along a timeline marked by technological breakthroughs and shifting consumption habits in the 21st century.

At the onset of the new millennium, the term podcasting didn’t even exist. But with the arrival of various technologies—such as the affordability of home recording equipment and software, faster and more accessible internet access, and a rise in niche communities longing for specialized on-demand content—a brand new, uniquely 21st-century medium was born.

Maybe nobody could have truly predicted that a medium most closely resembling old-time radio would go on to become the next big thing, but here we are. Over 100 million Americans are tuning into podcasts for information and entertainment every month, and podcast acquisition deals are being signed to the tune of $100 million. It’s very likely that you have your own favorite podcast whose weekly episodes you await with fervor. It’s unimaginable, in a way, to remember our world before podcasts, but let’s give it a try.

The World Before Podcasts

The first iPod debuted in 2001. A few years later, in 2004, former MTV VJ Adam Curry and software developer Dave Winer devised a plan that would enable them to download online radio broadcasts from the internet directly to Apple’s revolutionary device. Winer had authored an RSS (Really Simple Syndication) aggregator software, and Curry coded a program titled iPodder, which could extract audio files from an RSS feed so that they could be transferred to an iPod. For once, radio broadcast files could be stored on a portable player and listened to on the go.

In February of that year, journalist Ben Hammersley published a now-iconic article about the dawning torrent of online radio that Curry and Winer had partly helped bring to life. Citing the rise of the iPod, the increased affordability of home audio production software, and the proven appetite for blogging that had already come to dominate the web, Hammersley observed that “all the ingredients are there for a new boom in amateur radio,” and proceeded to propose a handful of prospective titles for this fresh wave of online broadcasting: “Audioblogging? Podcasting? GuerillaMedia?” Podcasting, a throwaway portmanteau of ‘iPod’ and ‘broadcast,’ was the one that ultimately stuck.

From there, podcasting slowly but surely started to catch on. By October 2004, the first podcast service provider, Libsyn.com (Liberated Syndication) emerged. Before the end of the year, the number of Google hits for the term ‘podcasts’ eclipsed 100,000. Hammersley’s coinage was here to stay.

Podcast: The Word of the Year

As 2005 rolled around, the hoopla surrounding podcasts was beginning to gain traction. It was the year the New Oxford American Dictionary named ‘podcast’ the Word of the Year, cementing the status of podcasts as the emergent media trend that was already, or soon about to be, on everyone’s tongues (or entered into their search bars).

There were a number of milestones that occurred in 2005 and set the stage for what the industry of podcasting would later blossom into. The first DIY guide to podcasting, entitled Podcasting: Do-It-Yourself Guide, was published by Todd Cochrane, a broadcast producer who founded the business Podcast Connect Inc.

While the amount of listeners regularly tuning into podcasts pales in comparison to today’s number, 2005 was the year when podcasts certifiably began flirting with the mainstream.

One of the most notable developments that 2005 saw was Apple introducing podcasts into iTunes 4.9 and building a directory of podcasts on the iTunes Music Store. For the next decade and beyond, podcasts would largely be associated with Apple, especially because iTunes and the Podcasts app (released in 2012) were the main destinations where most listeners could find, download, and subscribe to podcasts.

2006 was the year when podcasts were first freed from the confines of every listener’s Apple earbuds and presented before live audiences. To kick off the year, Steve Jobs instructed a live audience about how to create their own podcast using Apple’s free GarageBand software during a keynote address.

In October 2006, This American Life launched a podcast version of their popular radio show which, to this day, continues to be one of the most downloaded shows on the podcast charts.

That Christmas, the first-ever podcast was dispatched from Buckingham Palace, when Queen Elizabeth’s Christmas Day speech was made available to download as a podcast.

In the year that followed, when 2007 zoomed into view, podcasts began earning recognition for the massive audiences they were accumulating. English comedian Ricky Gervais set the Guinness World Record for the most downloaded podcast, with more than a quarter of a million downloads per episode. (This record would later be surpassed by Adam Carolla for his podcast The Adam Carolla Show, which achieved 59 million unique downloads.)

Radio personalities and comedians thrived in the early days of podcasting. In 2009, stand-up comedian Marc Maron launched a new podcast show where he interviewed a diverse range of guests from his garage studio, and it went on to become one of the most beloved shows of the medium.

After only five years into their existence, podcasts reached another milestone: Edison Research reported that 43% of Americans had heard of podcasting.

In the years to come, it started to look like podcasts had reached something of a plateau. They had carved out a particular place in the public consciousness, and the medium had bred its own celebrities, conventions, and breakthrough successes.

In Vulture, writer Nicholas Quah notes that “listenership kept growing slightly through the latter half of the aughts — two percentage points between 2008 and 2010 — even as what little investment money there was dried up and some podcast creators began to pull back.”

For a moment, it appeared as though a sizable portion of the podcasting industry had been overtaken by already-established media companies that had simply found a way to repackage popular radio and TV broadcasts to dominate the top 10 charts, week after week.

However, nothing could have prepared even the most prescient pundits for the tsunami that was building on the horizon.

A Watershed Moment in the History of Podcasts: Before and After 2014

In his scrupulous study of the history of podcasts, Quah divides podcasting up until this point into two main eras: “everything that happened before and after 2014.”

So, what seismic shift could occur to forever alter the trajectory of a ten-year-old medium that had already garnered a healthy audience base and thoroughly established itself in popular culture?

Well, in 2014, This American Life published a new show that you just may have heard of. Serial, an investigative journalism podcast, followed host Sarah Koenig as she reopened the case of a 1999 murder and built a rapport, over a series of telephone conversations, with the man who may or may not have been falsely imprisoned for it. For its innovative use of the podcast format and the captivating dynamic developed between Koenig and her interview subjects, Serial gripped the nation like no podcast had ever been capable of. It was the first podcast to be parodied on Saturday Night Live, it spawned an outpouring of other shows in the true crime genre, and it became the first podcast to win a Peabody Award.

The years after Serial didn’t see the number of people listening to podcasts grow at a gradual or consistent pace—podcast listenership snowballed.

“The number of monthly podcast listeners in America practically doubled in the five years after 2014, from around 39 million Americans to an estimated 90 million,” reports Quah. “In the five years preceding 2014, the same metric grew by only 35 percent.”

Some watershed moments that followed 2014 included another U.S. president lending their voice to the medium with Barack Obama appearing as a guest on Marc Maron’s show, and The New York Times debuting The Daily, a podcast “designed to match the fast pace of modern news [that] features original reporting and recordings of the newspaper’s top stories.”

In late 2017, Apple’s Podcast Analytics feature was launched, which confirmed that the listening stats behind podcasts were all that proponents were making it out to be. “On average,” the data revealed, “podcast listeners are making it through about 90 percent of a given episode, and relatively few are skipping through the ads.”

All the data collected in the years afterward has shown that listeners concentrate more on podcasts than most other media they intake, and listeners are more receptive of ads delivered via podcast—very good signs that helped thrust the industry into the position it occupies today.

A New Era in the History of Podcasts: Bigger Budgets and the Battle for Audio Share

By 2019, it was reported that 165 million people had listened to a podcast, and 90 million Americans listened to a podcast monthly. This colossal interest in the medium signalled an inevitable shift that was bound to occur sooner or later: what Quah calls “the era of big podcasting.”

For years, Spotify had been battling neck-and-neck with Apple Music for audio share. After evolving into a reigning platform for music, the Swedish streaming service started to make a number of strategic business moves in an attempt to solidify themselves as the premier platform for podcasts as well.

Spotify propelled their mission even further in 2020 by buying digital sports and culture publication The Ringer. Then, they rounded out their year’s worth of gargantuan acquisitions by signing an exclusive partnership with the independent podcaster who boasts a larger and more committed audience than perhaps any other content creator out there: Joe Rogan. (The Joe Rogan Experience YouTube channel has accumulated around 2 billion total views and 8.5 million subscribers, and each episode is downloaded over 190 million times monthly).

In July 2020, satellite radio company SiriusXM revealed its determination to expand its podcasting efforts by acquiring the podcasting app Stitcher as part of a reportedly $325 million deal.

While podcasting was initially celebrated for being a democratic medium where independent creators could find their voice, a predominant segment of the industry is now following in the footsteps of other mainstream media and getting picked up for exclusive deals with various networks, building toward a system that may soon mirror the film and TV streaming wars.

The Future of Podcasting

So where do podcasts go from here?

Quah prophesies that “we’re probably going to see a rapid acceleration of money — and further corporate interest — in the space, pulling the entire medium out of the relative fringes and deeper into the mainstream entertainment industrial complex.”

By 2021, podcast ad revenue is projected to surpass the $1 billion mark. And although it may appear as if podcasting is hurtling toward a point where it’s swallowed up by media conglomerates, and the medium’s DIY origins are no longer recognizable, it’s worth remembering that podcasting is less than two decades old—still riding out its teenage years—and that there are inevitably many new eras speckling the horizon as this medium, like so many before it, changes alongside the times and grows into its own.

Find the Voice of Your Podcast

The ongoing ascent of podcasting demonstrates the importance of audio in today’s media landscape. Whether you’re developing a fiction podcast project, a laidback comedy show, or a branded podcast that highlights the impact your work has out in the world, finding the pitch-perfect podcast voice for your project is a necessity. After all, podcasts are almost entirely made up of the sound of people talking—which means they must be voices that are a pleasure to listen to.

Now that you understand the history of podcasts and the story about the growth of this thrilling medium, get started on leaving your imprint on its future by hiring a talented voice actor to become the voice of your podcast. 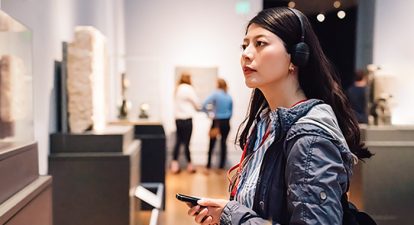 Text to Speech Software Use Cases

From finance to tourism, text to speech software is changing many professional fields. Discover the 5 key industries that have adopted TTS.