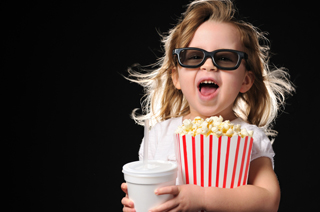 Have you noticed a trend in today’s most popular animated films?
Other than using Hollywood celebrities to voice animated characters and even drawing them in their likenesses, the themes and narratives presented in each film, despite big budgets, are largely the same.
When analyzing some of the most successful animated films, clear similarities are apparent in terms of basic storyline and plot.
Do you know what Hollywood’s blockbuster animated feature films have in common?
Hear more in today’s VOX Daily.

When listening to the most recent episode of my favorite podcast, the hosts revisited the topic of how there are only so many stories filmmakers can tell that bind us together as people or a nation.
They discussed how there have never been fewer ways to connect people using a shared medium, experience or ideal. Much of this has to do with life-altering technological advancements and the reality that not everyone adheres to the same set of values, perceptions or belief system.

Gone is the era of an entire country sitting around the television set to watch the same national nightly news broadcast. What we’re seeing now is the proliferation of content and fragmentation of how it is presented. People get information in a variety of ways from a diverse range of sources, presenting hurdles for content producers who launch new endeavors with the desire to reach the broadest possible audience.

This is the challenge that writers and producers face today: How to craft a story that resonates with everyone.

One shared experience that unites people is going to the movies. Another is growing up, discovering one’s identity and navigating what it means to be an individual separate from one’s parents yet still be part of the family.
Most of these plots include overprotective parents, a child that wants to break free, the child seeking their own path and finally a parent-child reunion wherein the two have a stronger, yet different bond and genuine appreciation for each other.

The plot pattern, thematically, looks a little something like this:

If one or two (or more!) examples of animated films that follow this pattern popped into your mind while reading, I’d love to hear what they were! Alternatively, if you can think of films that buck this trend, you’re encouraged to join the conversation, too.
Either way, be sure to comment and let me know!
Best wishes,
Stephanie
©iStockphoto.com/Stephanie Phillips