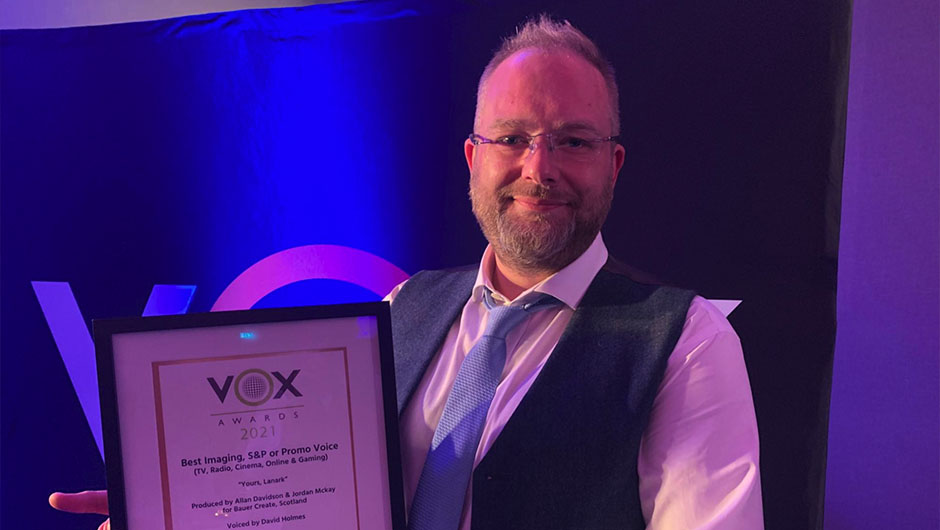 “‘David Holmes possesses the rare ability to put you at ease immediately.’ I found myself feeling very happy with this.”

Voice actor, David Holmes, quotes an article that mentions his work, pleased that his ability to bring calm to stressful topics, and passion for mental wellbeing topics, receive equal recognition. David recently completed a series of Menopause Awareness and Understanding workplace training videos which he found fascinating because he gave a voice to issues that are personally important to him.

“Working with more companies and HR departments on understanding and being kind toward ourselves, others and the planet. That’s where my passions lie.”

However, passion projects are just one part of David’s work that sometimes leap into the mythical. Voicing characters as diverse as ‘The Creature’ or a warrior dwarf, provided David with a breadth of opportunities in voice over acting to grow his portfolio on Voices and join the millions of users in finding their own success stories.

A Story of Scottish Success With Dwarfheim

Working as a voice over artist, David Holmes learned to seize opportunities regardless of whether the project was new or within his comfort zone. So, when the founders of Pineleaf Studio met with David via the Voices platform, the opportunity allowed both David and the game creators to learn and expand through the process.

As an asymmetric real-time strategy (RTS) game, Dwarfheim encourages players to work cooperatively to build, mine, and defend a shared base using the main characters – dwarves. However, when Dwarfheim’s creators first met, this concept was a little more than an idea on a napkin, according to Hans-Andreas Kleven, CEO of Pineleaf Studio. That idea earned them the concept of the year award and blossomed into the beginnings of the online game Dwarfheim.

What remained was finding the right voices to bring their vision of legions of Scottish dwarves to life. For David, who had never worked in a gaming environment before, the project seemed destined to be a learning experience for both parties. And that wasn’t even the allure for David. When asked about his initial thoughts on joining the game, he said:

“I was drawn…to the fact they wanted a Scottish accent…and so, to start building a gaming portfolio, these opportunities where a developer reaches out must be seized.”

This approach of mutual development worked well. Not only was it David’s first time doing voice talent work for a game, but it was outside the wheelhouse of the game developers, too. In this first experience working with game developers, David learned how processes flow differently compared to other projects he’d worked on. The experience of learning and growing along with the game developers helped David acquire the skills to provide voices for two additional gaming projects.

Game developers are often used to working in agile project environments, relying on their team members and beta testers from the public to help their projects thrive. In a way, the experience working on Dwarfheim was well-suited to David’s desire to grow his portfolio as the atmosphere of mutual growth benefited both users of the Voices platform.

“We want to continue [to]…have a process where this continues development together with the community,”  says Sigurd Murad, CTO, and CFO of Pineleaf Studio, speaking about the launch of Dwarfheim. His comments reflect the continued commitment of the company to grassroots success which may be found at the heart of many of David Holmes’ projects.

When David is Goliath: Little Victories and Big Successes

Marianne Austvik says, “There is a switch when you are working on something and you start enjoying it more as a person than something you work on.”

As COO, Producer, and Sound Director of Pineleaf Studio, Marianne was near and dear to the Dwarfheim project and David’s main point of contact for his voice over work. In some ways, her words speak to David’s flexible approach to tackling new projects, which may have been a driving factor in him earning a 2021 VOX Award.

David’s voice talent work on the Yours, Lanark campaign focused on drawing visitors back to the small, historic Scottish town of Lanark following closures brought on by the COVID-19 pandemic. By coincidence or poetic circumstance, David was raised near Lanark, and his journey to success with projects found on the Voices platform, in its way, came full circle.

“In the end, this all made me feel that the award was actually deserved and so I am proud to have been honored.”

From small Norwegian startups to quaint Scottish towns and businesses, David’s voice talent demonstrates how little voices can have big impacts spanning across the globe. David recently completed work for a unique Scottish company called Reekie Machining. As a sign of his unwavering passion for elevating unheard voices, David always tackles new projects that promise to help him grow while elevating the profile of his clients.

David’s Advice to Voice Actors on the Rise

Despite David’s success as a voice over talent, “there is no quick route,” he says. Rather, he encourages anyone wanting to get into the industry to practice “perseverance and dedication.” Perhaps this determination and persistence are best reflected in his love of a well-treated room, which he says is essential before he starts any recording work. Caring deeply about maintaining his authentic voice, David tries to limit acoustic feedback and the use of plug-ins to preserve the “genuine, honest nature of [his] voice”. Something as simple as your environment can make a big difference, and it’s those little “tips and tricks” that can truly set a recording session apart.

David’s path to success bears all hallmarks of determination, integrity, and dedication and mirrors the success of some small startup projects he has worked on. Most importantly, David’s journey emphasizes the value of staying focused and seizing opportunities as they emerge. By combining hard work and dedication with diligent self-promotion, David uses his talent for voice acting to uplift little voices so they reach big audiences.

“Spread your bets. You simply have to self-market, alongside Voices.com and Social Media.”

David remembers to be persistent but to make time to relax and check in with himself when he knows he is not at his best. Although, he has not always been committed to his personal care and would advise his younger self to remember to enjoy the little things.

“When it’s not going well and you feel down and your productivity is low…have a day off. Prioritize the DIY or the kids or defrosting the freezer or finishing the book you’re reading.”

For David, and the founders of Pineleaf Studio, sometimes challenges can present their opportunities. David found Marianne and the creators to be very trusting when he first began working on Dwarfheim, perhaps because they were juggling many challenges of their own. David provided them with many takes, capturing different styles and options, while also keeping in mind his words of wisdom for any voice acting work.

“Do not beat yourself up – it will achieve nothing.”

David’s passion for seizing new opportunities is well-suited to platforms like Voices which help voice actors build a diverse portfolio while bringing to life the visions of creators worldwide. His success flourishes due to his eagerness to work on a diverse array of projects – from Norwegian games to small Scottish towns. He tackles it all with a spirit of professional dedication and personal enthusiasm, while never forgetting to take time to himself to practice self-care.

After all, in David’s words, “who doesn’t want to be a proud, power-hungry, Scottish warrior dwarf?”

Samah is a communications professional with digital agency and corporate experience. She's written public-facing stories for the government and a wide array of non-for-profit organizations. Prior to joining Voices, she used her expertise to guide Ontario regulators to communicate effectively. Samah graduated from the University of Toronto with a B.Sc (Hons) degree in psychology and professional writing & communication. 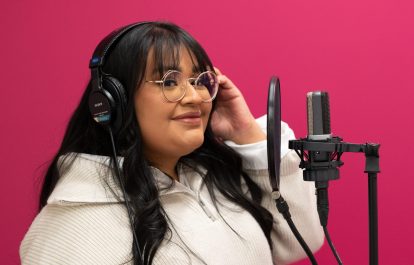