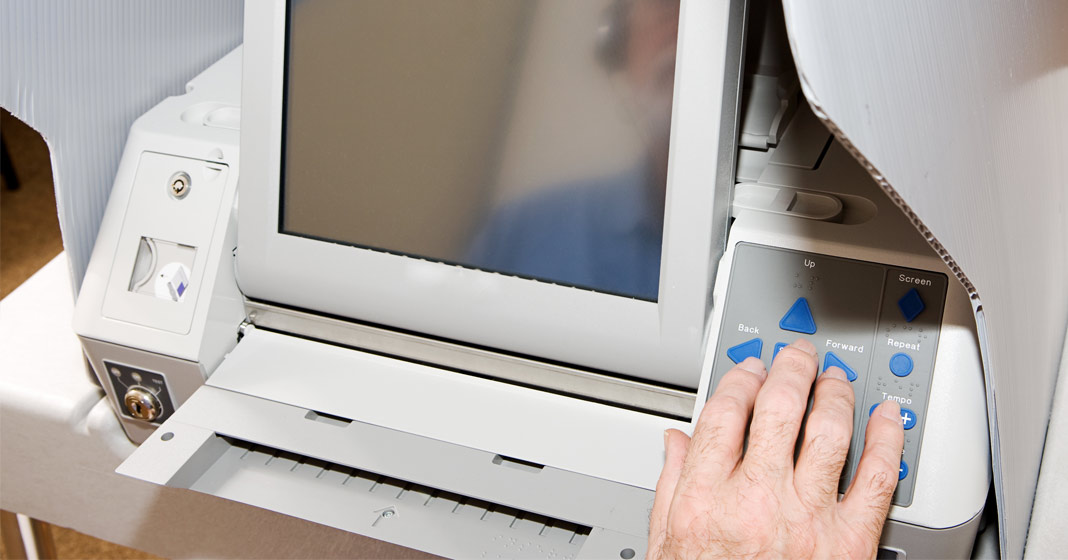 What Is Accessibility for Voting? The Global Innovations Driving Change for Disabled Voters

Being able to cast your vote in an election shouldn’t feel like scaling Mount Vesuvius.

But, for countless people with varying abilities, the reality is that exercising their democratic right can sometimes still feel like that big of a climb.

Thankfully, some staggering accessible voting and civic participation innovations around the globe are starting to move those mountains.

To learn more about those innovations, we interviewed Michael Fembek and Peter Charles from the Zero Project.

In this article, we’ll answer some big questions like:

What is Accessibility for Voting?

“Accessibility is the usability of a product, service, environment or facility by people with the widest range of capabilities,” according to the International Organization for Standardization.

Accessibility for voting means making voting accessible to all eligible voters during elections.

Currently, around this vast globe of ours, local or federal elections truly vary on how accessible they are to all voters. Canada is a good example of a democratic country that offers what many would see as a standard level of accessibility for voters.

It may be easy to think that accessible voting just impacts those with physical disabilities to vote. However, they make up just one of many different kinds of people impacted by voting accessibility, including:

A World with ‘Zero’ Barriers

The Zero Project is working hard to ensure all people groups with any disability are never forgotten, no matter what corner of the world they’re in.

Based in Vienna, Austria, the non-profit focuses on the rights of people with disabilities globally, on the background of the UN Convention on the Right of Persons with Disabilities.

“Zero means working for a world with zero barriers. We’re making our contribution so barriers are removed,” Michael Fembek, the director of the Zero Project, says.

The non-profit has a growing global network of 4,000 experts, with or without disabilities, from over 150 countries that seek to identify the most innovative policies and practices that are improving the lives of people with disabilities.

Around 20-30% of the Zero Project’s network has some form of disability.

“The Zero Project is a worldwide network approach that encourages a huge network of experts. Every year, more than 1,000 people (all from their network of experts) who nominate, share expertise, share goals and finally vote on the annual topic of the Zero Project. This leads to a selection of some 60 to 80 innovative practices and policies on one of the four topics that we go through on a four-year cycle,” Michael says.

This process culminates in the annual Zero Project Conference, held in the Vienna headquarters of the United Nations, where change makers and innovators from all sectors of society gather to celebrate the Zero Project Awardees, hear from international decision-makers and opinion leaders, share ideas and network.

This year, the Zero Project’s theme is Independent Living and Political Participation and 66 innovative practices from 78 countries were selected, while 10 innovative policies from 26 countries were awarded. Underneath that umbrella topic, they highlighted over a dozen innovations and initiatives that are making voting more accessible around the world.

Michael and his colleague Peter Charles, who is the project and process manager of the Zero Project, believe making voting more accessible will allow people with disabilities to actually self-represent and have a voice that’s heard.

“If things like voting are inaccessible, then it’s very difficult to get a huge sector of society to be able to have their opinion and make change on things that are really important for them,” Peter says.

Michael and Peter applauded a couple of the 76 incredible practices and policies that shaped accessible voting globally in the last few years. Here are some of the standouts:

But there was progress in one area specifically that Peter felt had been neglected in prior years.

“For myself personally, I’m really excited to see the progress that’s being made for support for people with intellectual disabilities to vote. So often, when people think about voting accessibility, they’re thinking about a polling booth being made accessible for a wheelchair to be able to go inside. Or papers for people with vision impairment so they can make their vote,” he says.

Peter believes people intellectual disabilities are often forgotten in the process. It’s also been a hot-button issue in the U.S., where some states purge those with intellectual disabilities from voter rolls. While clearly, Peter supports enabling every person to exercise their democratic right, he says navigating a country’s political landscape is tricky no matter who you are.

“I think even for people without intellectual disabilities, reading information on party manifestos, trying to understand who to vote for can be quite difficult already but then you add the element of having an intellectual disability and then it becomes almost impossible to make your way around and know who to vote for or how to vote,” Peter says.

What Countries are Leading the Way?

There are seven countries that have stood out to both Michael and Peter with innovative accessible policies and practices, year after year. They are:

“We generally award a lot of policies from Canada. It’s quite difficult for us to say what that means, because it could be that the governments are much more active in promoting the good work that they are doing than some other places are not doing. It could just be that they have really excellent policies in that area,” Peter says.

India also has stood out to the Zero Project.

“There’s a lot of great work going on in loads of different NGOs (non-governmental organizations) and disability issues in India,” Peter explains.

There are three growing trends Michael and Peter have identified with accessible voting and civic engagement based on this year’s Zero Project winners.

Barcelona-based Scytl is just one of the handful of groundbreaking technologies that Michael and his team at Zero Project have applauded.

“It’s far easier than paper voting could ever be for me. It actually means that I can independently vote and be certain that I have voted for the person who I intended to vote for,” one disabled voter says about using Scytl.

Another electronic voting system turning heads in Vienna is OmniBallot.

OmniBallot, by Seattle-based tech company Democracy Live, has been applied in over 100 elections in the United States, and it has been used by more than one million voters with disabilities.

Democracy Live also launched an Alexa Skill called LiveBallot, the first voting ballot for the Amazon smart home device. You can read more about the groundbreaking work Democracy Live is doing for the US elections in this article.

“These are electronic voting systems aren’t specifically made just for people with disabilities but can be used, as far as we understand, by almost all persons with disabilities and increasingly support everyone in voting from home. This is definitely a trend,” Michael says.

The easy-language approach has become much more adopted as awareness for the need for widespread accessibility (beyond just physical disabilities) is growing.

Easy-language material is geared at making information and communication around elections and political participation more accessible for everyone, especially for those with intellectual disabilities.

Peter says a few of the stand out award winners from this year’s Zero Project had to do with easy-language reading materials.

“We have a few awardees from this year, that focus on providing support and education to help people with intellectual disabilities, so they can understand what parties there are and the process of voting for the party they wish,” he explains.

“There’s an NGO in Scotland called Enable Scotland, they worked with the UK electoral commission and created easy-read voting guides and also created events so people with intellectual disabilities can meet their politicians and ask them questions about politics.

“Similarly in Sweden, Studieförbundet Vuxenskolan, run study groups for people with intellectual disabilities, so they can learn about Swedish politics. Again, that includes easy-read materials so they can better navigate the complexities of politics,” Peter says.

A few European countries have reinvented how the blind community physically interacts with a ballot.

Bogazici University and the Association of Barrier Free Access in Turkey created tactile ballot papers that enable voting for both those who can and cannot read braille. While in Georgia, the Central Election Commission created a tactile guide, which fits over the standard ballot.

“This is quite surprising because it is so obvious that it’s supportive and helpful, but it’s considered a novelty in many countries, and not used broadly,” Michael says.

Nothing About Us, Without Us

While there are some tremendous steps being taken around the world, both Michael and Peter acknowledged there’s still lots of work to be done.

“There’s a saying, ‘There’s nothing about us, without us,’” Michael says. “There are still many policies to try to make something more accessible and inclusive. The process of decision making has to be done right from the beginning.”

Michael stresses how vital it is for any government to get accessibility stakeholders involved in the creation of policies right at the start.

“Get everyone at one table, from all sides, to discuss what should be done. Everyone who should sit at the table is there, taken seriously and really create change on different levels of policymaking.”