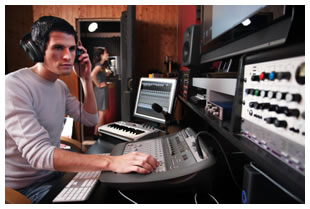 How Familiar Are You With The Audio Signal Chain?

When you first get into voice over, you’ll quickly learn that something expected of you (to work independently) is an audio home recording studio.

Voices CEO David Ciccarelli is an honours graduate of the Ontario Institute of Audio Recording Technology (OIART). On his blog, The Biz, he took time to outline the basics of the audio signal chain, comprising of three elements that every voice over professional should be aware of and understand.
We’ll briefly discuss these elements today on VOX Daily!

An acoustic sound source may be an instrument such as a piano, violin, trumpet, or even the human voice. Our voices are organic and therefore acoustic in nature.

An electric sound source may be instruments with audio outputs that can be plugged into a preamplifier or a recording device such as an electric bass amplifier, electric keyboard, drum machine and so on.

Digital sound sources include computer based sounds such as software used to produce sounds or sound effects that are pre-recorded.

Once you have a sound source, you’ll need a way to capture that sound source. This is where microphones come in. All microphones are built to perform the same basic task… to capture the varying pressure waves in the air and convert them into varying electrical signals.

Technologies commonly used to accomplish this conversion include:

* USB microphones (microphones that you can connect to your computer via a USB port) come in many different styles and varieties with varying features.

Following the microphone, which captures the sound and converts it, you have preamps. Engineers tend to agree that the preamp is just as important as the microphone when it comes to producing quality audio.

Preamps are available as hardware and as software. Many mixing boards or desks have microphone preamps built in. There are also a plethora of external preamps from which to choose, which is great for adding the exact tone and feature set you need for your setup.

USB Microphones have made recording even easier! The USB mics do this without an external preamp.

Many USB microphones come bundled with preamplifier software that provider additional control and gain adjustment to the signal being recorded. Software preamps are purely digital and therefore do not amplify the voltage of the microphone. The software simulates an increase to the audio signal and therefore doesn’t offer nearly the quality or characteristics of a traditional analog microphone preamplifier.

USB microphones will work without the software using the standard drivers included in your computer’s operating system.

Whew! That’s a lot of info!

I know that some of you really enjoy tech talk and hope that this article helps those who are new to the industry. Should you be hungry for more, I did an interview with OIART’s Bob Breen that you may find useful and also get a kick out of.

If you have any favorite combos that you’d like to share for what goes into your signal chain, be my guest!
Looking forward to hearing from you,
Stephanie