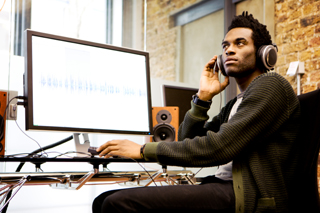 Ever wanted to change the way your voice sounds without the aid of recording software?

How about some do-it-yourself voice processing?

We’ve compiled a number of tried, tested and true techniques for doing just that! Ideas ranging from how to sound like you are underwater to sounding like you’re on the telephone are covered in this article.

Be sure to read what we have here and also add your own ideas for others to experiment with in today’s VOX Daily.

Changing How Your Voice Sounds

If you’ve ever played a brass instrument such as a trumpet, trombone or tuba the implementation of some of these ideas will come especially easy to you. All of the following, with the exception of the helium balloon idea, were tried and tested by members of the Voices team.

Wax paper isn’t just good for baking with! Household items found in your kitchen may be just the thing for creating effects on your voice.

Fill a bowl up with water and speak over the water. Make yourself sound like you are under water. I learned about this technique in a workshop when the teacher was reminiscing about a studio session he had while recording for the cartoon Fraggle Rock cartoon during their underwater episode.
Be sure to keep your nose out of the water and you should be fine!

How to Sound Like You Are In a Tunnel

Have a tube around the house that you could use to substitute for a tunnel? Speaking into a tube can create different reverberations and also give you a slight echo. You may want to experiment with how your voice sounds coming out of different kinds of tubing, for instance copper, metal, or plastic tubing.

Very small doses of helium, when inhaled, can temporarily alter the timbre of your voice. While it doesn’t structurally change your vocal mechanism, it does affect the vibration of the vocal folds. The results are that your voice sounds higher, even squeaky. Although it may sound neat or be fun to do, keep in mind that the inhalation of helium is dangerous. Helium is not oxygen and inhaling it may pose serious side medical side effects.
This may go without saying but do not use helium regularly or audition for a long project with the aid of helium. Do not compromise your health for the sake of maintaining a character on an animation or audiobook.

How To Make a Siren Sound

Try humming a chromatic scale up and down. Slide on those notes! This is especially effective with the use of a sheet of wax paper or tin foil.

How To Make a Train Sound

Use plastic wrap, also known as Saran wrap / Cling wrap. Pull the wrap tight across your mouth and then say your lines with a monotone delivery.

If you want to give people the impression that you are in an enclosed area, you can try to place a cardboard box over your head (make sure you have enough room to breath or cut holes in the box for air) and place the microphone just outside of the box. If there is room, try it with the mic on the inside of a box too and see what happens.

Muffle Your Voice With a Blanket

Blankets draped over your head can help to create a muffled sound when you speak. Leave yourself enough room to breathe properly.

Experimenting With a Toilet Paper Roll or Paper Towel Roll

Try using an empty toilet paper or paper towel roll and see what happens. Because there is no paper on it, you’ll find that it is easier to use and sounds better than if you were to use a roll with paper on it.

Plugging Your Nose To Sound Nasal

To give illusion that you are sick, congested or have a clogged up nose try plugging your nose when you talk. Don’t forget to breathe through your mouth. Sounds adenoidal! You can also produce a similar adenoidal sound without plugging your nose to produce a nasally, geeky sound. Pat Fraley has used this technique in his workshops to help students distinguish voices for characters in animation.

Blur Your Voice With a Hand Held Fan

On a hot day, do you ever cool off with the help of a small hand held fan? Try speaking in close proximity to the fan and hear your voice take on a choppy, vibrating effect. I envision this as vocal strobe lights. Definitely worth a try!

Make a Telephone Effect by Calling Yourself

Set-up your mobile phone in front of the microphone and call yourself from a different line. You’ll need to answer the mobile phone, crank up the gain on your microphone then leave the recording area and read your script from another room in your studio or house.

I’m excited to hear from you! Be sure to comment with your ideas, experiments and stories here and join the conversation.
Best wishes,
Stephanie
Â©iStockphoto.com/Teemu Tuuloskorpi