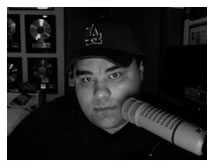 Interview with Morgan Freeman Sound A Like, Larry Davis

During VOICE 2010, I happened to meet a very interesting person who has the amazing ability to sound like one of the most beloved and universally recognizable voices working today.

Larry Davis, a professional voice over artist, is a man of many talents, including being able to sound like Morgan Freeman.
We got chatting after the Diversity panel and I’m excited to share my conversation with Larry about his work and how he has come to be known for delivering Hollywood style reads.

A Voices Interview with Larry Davis

VOX: When was it that you discovered you could imitate Morgan Freeman?
Larry Davis: I was watching Shawshank Redemption with friends at home in the summer of ’08 and I was doing the Morgan impression. One of my buddies said, why don’t you put a little sample of that on your VO demo. I did the next day, and then within just a few days, my phone started ringing.

VOX: What was the first “Morgan” style gig you ever booked?
LD: It was a non broadcast narration of some kind, honestly I don’t remember the details. I do know that it was very “story teller” and I remember that the client was thrilled.

VOX: How often are you called upon to record using the Morgan style delivery?
LD: 4 – 5 times a week. It’s amazing to me how many people love this sound. I love this sound, which is why I do it.

VOX: Have you run into any legal issues pertaining to your work as someone who is a sound-a-like for a celebrity?
LD: I haven’t because I’m not claiming that I am Morgan in the work, I just kind of sound like him. I would never represent myself as Morgan. I am a story teller.

VOX: Have there been any gigs that you have done that Morgan had turned down previously?
LD: I don’t know if it’s true or not, but my agent said that I got some Visa ads that he didn’t want to do originally, I think he changed his mind though.

VOX: Are you ever required to do auditions for work that needs a Morgan Freeman style voice or are you simply hired straight away based upon your demo?
LD: I do several auditions every week that call for a Morganesque sound. I also get booked right off my demos several times a week.

VOX: What are the biggest challenges you face as a Morgan Freeman sound-a-like artist?
LD: I think of myself as a story teller who has some of the same qualities in my sound as Mr. Freeman. I don’t really feel any challenges, I just have fun acting.

VOX: How do you get into your “Morgan” voice?
LD: I think about my audience (one person) who needs to hear the message and just imagine how it might sound coming from a great talent like Mr. Freeman. I just let it flow. I know God is very involved.

VOX: Have you ever had an encounter with Morgan Freeman? If not, what would you say to him given the opportunity?
LD: No, I’ve never met him. I’d love to tell him how big a fan of his I am. I believe he’s one of America’s treasures. I watch every movie he’s in and make sure to learn something new when I see the movies over again.

VOX: I know that sounding like Morgan Freeman is only one element of your artistic voice talent. What else are you working on and where would we know your voice from?
LD: I’m the worldwide voice of Yahoo, I’ve done skits for Jimmy Kimmel, Fox Sports, Subway, Six Flags, McDonalds, NHL, Eckrich Sausage, PGA tour and LOTS more.

VOX: Where do you hope your career takes you next?
LD: I want to continue teaching VO to my students here in LA and keep doing voice work that makes me happy. I feel very fortunate to be doing what I love everyday. I love being behind the mic performing so much. I can’t imagine my life without VO. I’ve been doing it since I was around 5 years old… I always did crazy characters for my friends in school, TV commercials when I was a tween and into my teens, radio shows all over the US and full-time VO since 2006. I know I’m one of the lucky ones whose dream came true.

VOX: Is there anything else you’d like to share with us, Larry?
LD: I’d just like to add that anyone who can act can do voice over. It’s not about your voice, it’s about conveying a message. Work on your craft everyday. Take VO lessons from great teachers and talent who work everyday. Read books, take acting lessons and work on the “real you” sound. Then once you have that locked, start exploring the characters and styles you want to perform. This is a fun business, so enjoy it. I hope to work with you soon. Check me out and drop me a line – www.larrydavisvoice.com

Thank you to Larry for joining us and I hope you learned something new today. Are you a celebrity sound a like? Feel free to add a comment for Larry here or share your own experiences.
Best wishes,
Stephanie