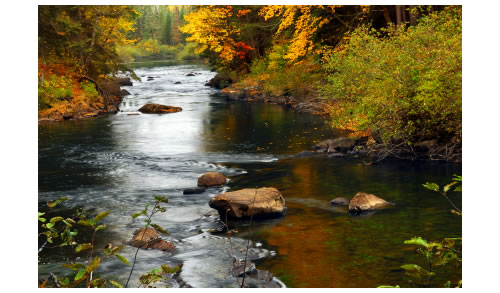 Narration in Film and Documentaries a Must

After sitting down to watch a 31-minute documentary without any narration whatsoever I came to the conclusion that films without narration are incredibly difficult to digest.

Something was obviously missing and I tell you, it was painful!
Is narration necessary in film? Let’s find out.

Remember those hour-long documentaries made by National Geographic with the animals going about their business?

How about the numerous historical programs on A&E and TLC?

What would happen if you were to strip them of their narration? It would be catastrophic, wouldn’t it?

This evening, there was nothing on TV and we were out of LOST DVD episodes so I clicked around to find a documentary from our cable provider to watch. Thirty-one minutes of natural splendor featuring Algonquin Provincial Park was calming and tranquil, yet as I said before, something was missing. It didn’t take long for me to realize that the documentary I was watching didn’t have a narrator and that fact made me uncomfortable.

Why do you need a narrator for your documentary film?

I realized just how integral speech and narration is to someone who is watching a film or documentary.

A trained narrator provides benefits to the viewer:

Another surprising aspect of this experiment proved that although beautiful, splendorous and serene, the film was not able to keep my undivided attention, partially because I was so distracted by the fact that there was not a narrator.

I desired the companionship of a narrator and wanted someone to comment on what I was seeing to affirm my interpretation of the film… but most of all, I needed someone to speak to break the solitude — to share the moment.

Watching the film in complete silence (with the exception of some nature sounds and music) seemed too private and intimate, almost like I was intruding on the filmmaker and his crew.

Weaving Words in a Wonderful World

This past week our family has been watching a lot of material narrated by Sir David Frederick Attenborough, namely a six-disc collector’s set from BBC called “Life.” David Attenborough’s is a voice that you can hear narrating thoughts about the world around you even when he’s not speaking. Now that’s mental real estate!

Attenborough (b. 1926), British broadcaster and naturalist, has been writing and presenting natural history programming on BBC for over 50 years. To say that he has the market cornered in this area is an understatement.

Derek Chappell blogged about Sir David Attenborough and his ability to paint words in a recent blog post which in turn got my wheels turning to share some thoughts with you. Other great narrators where nature is concerned are James Earl Jones (b. 1931) and Morgan Freeman (b. 1937). The work Jones did on Disney’s Earth (2009) was absolutely majestic. Other celebrity narrators in this niche include, but are not limited to, Sigourney Weaver who narrated the Discovery Channel’s “Planet Earth” series and Pierce Brosnan who narrated Discovery Channel’s series, “Blue Planet.”

Scenes depicting life in the wild remind us of what a wonderful and dangerous world we live in. Brave souls behind the camera sacrifice life and limb to bring us moving images that tell stories of incomparable beauty and awe without compromising the integrity of what they are filming.

Waiting for the perfect shot for days on end, stretching milliseconds into tangible moments and spectacular time lapse sequences give us more than just a glimpse into the miracle we call life. This art form takes patience, skill and passion. A storyteller’s respect for nature and their love projected through the lens of the camera affords viewers a greater appreciation and understanding of the world around us.

One of my favourite quotes comes from Dr. Vance Havner, who observed, “God made the country and man made the town – and you certainly can see the difference.”

The imagery itself presented in documentaries about the natural world speaks volumes. Well-crafted narrative and spoken word storytelling serves as icing on the cake, but what a lovely icing it is!

Having a narrator on board is kind of like a nod in your direction giving you permission to partake in what is going on. They invite you in and encourage you to journey with them as the story unfolds on the screen.

People like narrators because a narrator provides security. They can spur on new thoughts, segue eloquently when required and persuasively convey emotion using the most powerful and innately wonderful tool in humanity’s communicative arsenal — the human voice.

How important is narration to you?