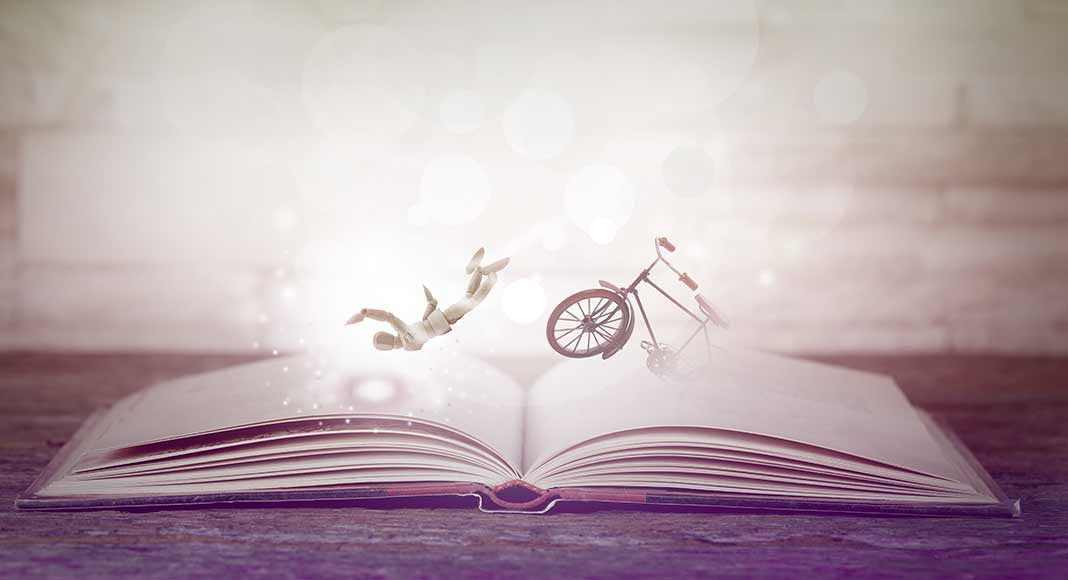 The craft of narration is one of stamina and commitment. If you’re looking to lend your voice to the world of audiobook narration, read these narration script passages aloud to get a sense for what it’s like to ‘marathon’ through a long-form practice read.

Check out our roundup of expert narration preparation tips to help you excel in your narration development too!

You’ll find two narration sample scripts provided here. Both are pulled from literature found in the public domain, meaning they’re copyright free and available for public uses. One is more lengthy and meant for practicing long-form reading. The other is intended for voice over demo creation. Any narrators looking for short passages to use as their narration demos are welcome to use the one found below, or take a look at our other narration sample scripts.

Have fun with these young adult literature scripts. Try your hand at character reads by giving each character their own distinctive voice. Try to assign personality traits to the characters that will feed into their vocal inflections. Research how words are meant to be pronounced.

Narrate this passage in your natural accent. Only assume an accent if prompted by the description of a character’s vocal traits.

I remember him as if it were yesterday, as he came plodding to the inn door, his sea-chest following behind him in a hand-barrow—a tall, strong, heavy man, his tarry pigtail falling over the shoulder of his soiled blue coat, his hands ragged and scarred, with black, broken nails, and the sabre cut across one cheek, a dirty, livid white. I remember him looking round the cover and whistling to himself as he did so, and then breaking out in that old sea-song that he sang so often afterwards:

“Fifteen men on the dead man’s chest—
Yo-ho-ho, and a bottle of rum!”

in the high, old tottering voice that seemed to have been tuned and broken at the capstan bars. Then he rapped on the door with a bit of stick like a handspike that he carried, and when my father appeared, called roughly for a glass of rum. This, when it was brought to him, he drank slowly, like a connoisseur, lingering on the taste and still looking about him at the cliffs and up at our signboard.

“This is a handy cove,” says he at length; “and a pleasant sittyated grog-shop. Much company, mate?”

My father told him no, very little company, the more was the pity.

You’ll find two narration sample scripts provided here. Both are pulled from literature found in the public domain, meaning they’re copyright free and available for public uses. One is more lengthy and meant for practicing long-form reading. The other is intended for voice over demo creation.

Have fun with these young adult literature scripts. Try your hand at character reads by giving each character their own distinctive voice. Try to assign personality traits to the characters that will feed into their vocal inflections. Research how words are meant to be pronounced.

Narrate this passage in your natural accent. Only assume an accent if prompted by the description of a character’s vocal traits.

Dark spruce forest frowned on either side the frozen waterway. The trees had been stripped by a recent wind of their white covering of frost, and they seemed to lean towards each other, black and ominous, in the fading light. A vast silence reigned over the land. The land itself was a desolation, lifeless, without movement, so lone and cold that the spirit of it was not even that of sadness. There was a hint in it of laughter, but of a laughter more terrible than any sadness—a laughter that was mirthless as the smile of the sphinx, a laughter cold as the frost and partaking of the grimness of infallibility. It was the masterful and incommunicable wisdom of eternity laughing at the futility of life and the effort of life. It was the Wild, the savage, frozen-hearted Northland Wild.

But there was life, abroad in the land and defiant. Down the frozen waterway toiled a string of wolfish dogs. Their bristly fur was rimed with frost. Their breath froze in the air as it left their mouths, spouting forth in spumes of vapor that settled upon the hair of their bodies and formed into crystals of frost. Leather harness was on the dogs, and leather traces attached them to a sled which dragged along behind. The sled was without runners. It was made of stout birch-bark, and its full surface rested on the snow. The front end of the sled was turned up, like a scroll, in order to force down and under the bore of soft snow that surged like a wave before it.  On the sled, securely lashed, was a long and narrow oblong box. There were other things on the sled—blankets, an axe, and a coffee-pot and frying-pan, but prominent, occupying most of the space, was the long and narrow oblong box.

In advance of the dogs, on wide snowshoes, toiled a man. At the rear of the sled toiled a second man. On the sled, in the box, lay a third man whose toil was over,—a man whom the Wild had conquered and beaten down until he would never move nor struggle again. It is not the way of the Wild to like movement. Life is an offence to it, for life is movement; and the Wild aims always to destroy movement. It freezes the water to prevent it running to the sea, it drives the sap out of the trees till they are frozen to their mighty hearts, and most ferociously and terribly of all, does the Wild harry and crush into submission man—man who is the most restless of life, ever in revolt against the dictum that all movement must in the end come to the cessation of movement.

But at front and rear, unawed and indomitable, toiled the two men who were not yet dead. Their bodies were covered with fur and soft-tanned leather. Eyelashes and cheeks and lips were so coated with the crystals from their frozen breath that their faces were not discernible. This gave them the seeming of ghostly masques, undertakers in a spectral world at the funeral of some ghost. But under it all they were men, penetrating the land of desolation and mockery and silence, puny adventurers bent on colossal adventure, pitting themselves against the might of a world as remote and alien and pulseless as the abysses of space.

They travelled on without speech, saving their breath for the work of their bodies. On every side was the silence, pressing upon them with a tangible presence. It affected their minds as the many atmospheres of deep water affect the body of the diver. It crushed them with the weight of unending vastness and unalterable decree. It crushed them into the remotest recesses of their own minds, pressing out of them, like juices from the grape, all the false ardors and exaltations and undue self-values of the human soul, until they perceived themselves finite and small, specks and motes, moving with weak cunning and little wisdom amidst the play and interplay of the great blind elements and forces.

An hour went by, and a second hour. The pale light of the short sunless day was beginning to fade, when a faint far cry arose on the still air. It soared upward with a swift rush, till it reached its topmost note, where it persisted, palpitant and tense, and then slowly died away. It might have been a lost soul wailing, had it not been invested with a certain sad fierceness and hungry eagerness. The front man turned his head until his eyes met the eyes of the man behind. And then, across the narrow oblong box, each nodded to the other.

A second cry arose, piercing the silence with needle-like shrillness. Both men located the sound. It was to the rear, somewhere in the snow expanse they had just traversed. A third and answering cry arose, also to the rear and to the left of the second cry.

“They’re after us, Bill,” said the man at the front.

His voice sounded hoarse and unreal, and he had spoken with apparent effort.

“Meat is scarce,” answered his comrade. “I ain’t seen a rabbit sign for days.”

Thereafter they spoke no more, though their ears were keen for the hunting-cries that continued to rise behind them.

At the fall of darkness they swung the dogs into a cluster of spruce trees on the edge of the waterway and made a camp. The coffin, at the side of the fire, served for seat and table. The wolf-dogs, clustered on the far side of the fire, snarled and bickered among themselves, but evinced no inclination to stray off into the darkness.