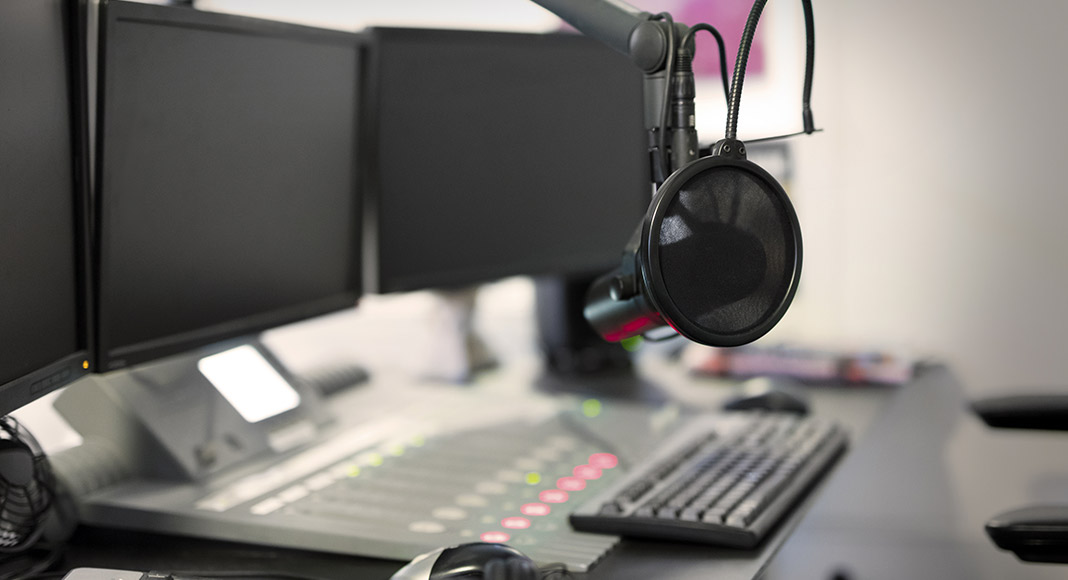 How to Edit a Podcast: Podcast Sound Effects, Music, and Dialogue

In the ever-evolving world of podcasting, the shows that have typically found the most success are the ones that use podcast sound effects, music, and dialogue to paint a picture and draw their listeners deep into the story being told. Although editing sound effects into your podcast is one of the final stages of the podcast production process, you can’t underestimate the impact of working with an audio engineer who understands how to edit a podcast. Podcast sound effects, music, and dialogue have the power to bind the various segments of a show into one unified whole.

To gain more insight into what it takes to balance the usage of podcast sound effects with moments of silence, and simply how to tackle every angle of audio editing necessary for a well-produced podcast, we spoke with Randy Rektor, an audio and visual content producer at Voices.com.

How to Edit a Podcast: Intro to Digital Audio Editing

Audio post-production serves multiple purposes. For one, it can function as a much-needed Band-Aid when it comes to correcting mistakes or inconsistencies in the spoken delivery featured in a podcast recording. Whether a word was mispronounced, the microphone captured an unwanted noise during the recording, or certain lines were delivered in the wrong order, you can easily fix all of that in the editing suite during post-production.

To avoid any unwanted noises and get cleaner recordings, read up on how to best soundproof a room for voice over recording.

Beyond repairing any issues that stand out in the recording, the post-production stage is where you can edit sound effects into your podcast to enhance the narrative by placing emphasis on unique or pivotal moments in the storytelling. The goal of improving your understanding of how to edit a podcast is to make your podcast flow seamlessly from one segment to the next, and podcast sound effects are one of the best ways to accomplish this.

The First Steps of Podcast Editing

Voices.com content producer Randy Rektor walks us through his first steps once he receives an audio file that he’ll be editing into a podcast:

“First, I’ll download the files. Then, I’ll upload that into my editing software,” Rektor instructs. “I’ll then check to see how long the file is to get an idea of how long the episode will be. Depending on what the content consists of, I’ll be able to see the show’s gaps and pauses, and get a general sense of what I’m working with.”

After he understands the scale of the project he’s about to begin chipping away at, Rektor plays the file from start to finish, performing a majority of the editing in one pass.

“I don’t clean everything up and then go back and edit,” he says. “It happens in real time. That’s one key to making it sound natural, especially when it comes to dialogue recording. When you edit everything as you listen, I find it maintains the pace of the speaker’s delivery, and ends up feeling less doctored in the end.”

How to Edit Podcast Dialogue

There are a number of reasons why audio editors commonly need to edit the speech of the speakers featured in a podcast.

For one, the speaker may emit mouth noises or other undesirable sounds that distract from the point they’re trying to get across. There are also the pervasive issues of mispronunciations, run-on sentences, and subjects that are discussed yet ultimately don’t have a place in the finished recording. For these reasons, dialogue editing can be a godsend, allowing you to clean up any verbal accidents in the editing suite.

Here a few key tricks you ought to put into practice when you’re first gaining a handle on how to edit a podcast, specifically editing podcast dialogue:

When a story is interrupted, splice its strongest parts together to create a single stream of dialogue

When Rektor is editing a podcast recording, he frequently encounters moments where somebody is speaking, but suddenly cuts themselves off in the middle of a story, explaining that they didn’t quite get out what they meant to say, before launching back into the story by repeating it from the beginning. In instances like these, the speaker typically rushes through the part of the story that they’ve already recounted, in order to save time getting back to the point where they interrupted themselves.

“You can’t use that rushed part of the story in the final version of your podcast,” Rektor explains. “What you actually have to do is take the first part of the story, up until the moment where the speaker messed up, and then splice that audio clip with the second part of their story.”

Some people who haven’t yet learned how to edit a podcast wonder whether it is better to preserve a speaker’s original speech, especially if they ramble or have certain vocal quirks—or whether to edit out their idiosyncrasies to make the podcast’s audio the most digestible for listeners.

“There’s definitely a balance,” Rektor says. “I think retaining a speaker’s original speech is really important. It goes back to authenticity—I think listeners can sniff out when something’s not authentic. I feel like that’s an issue scripted podcasts sometimes encounter, because when people are listening to podcasts, they don’t necessarily want to hear a narrator. They want something more organic and off-the-cuff.”

Silence is your friend

“Another mistake that people make when they’re starting out in audio editing,” Rektor explains, “is that they’ll just edit out all of the silence.”

Newcomers to podcasting often have a tendency to perceive silence as something that will cause listeners to tune out that should be avoided at all costs. In fact, silences usually arise during moments when a speaker is breathing or thinking, so their presence is actually a meaningful part of the overall pacing and progression of their delivery. As people talk, they naturally take moments to pause and think through what they’re verbalizing. “Intermittent silences can be really important to communicate authentic thought processes and help a vocal delivery feel natural,” says Rektor.

Although pauses happen naturally while most speakers are working through their thoughts, audio editors can also strategically place them within an audio track to help improve the flow of the content. And while periodic silences can give your podcast a more casual pace, you most definitely want to avoid dead silence.

If you are artificially adding a gap into your track, Rektor underscores how critical it is to record room tone to fill the air between the sounds of people speaking.

“What you have to do is find a section where the speaker isn’t talking, so that you’re just left with the sound of the room,” Rektor advises. “In the gap between speaking, drop the room tone in-between, and fade in and out from that. That way, it still sounds like you’re listening to a recording, and it’s not just dead silence—dead silence can be very disconcerting.”

Recording room tone simply involves capturing the sound of a room without anybody speaking. You can easily get the room tone right before or after a podcast recording takes place, no matter whether you’re in a studio or on a Zoom call.

“Every room has a sound, whether it’s the air conditioner or traffic going by,” says Rektor. “If you cut from that to nothing, then it just sounds really strange.”

How to Incorporate Podcast Sound Effects

After you have ensured that all of your podcast’s dialogue is intelligible and flows organically, then editing sound effects into your podcast can enhance the original recording. Once you have a firm grasp on how to edit a podcast, you’ll be able to recognize that well-placed sound effects can forge the illusion that the auditory environment is real rather than fabricated, and can create tension, atmosphere, and emotion in the audio.

“In the first episode, David (Ciccarelli) was talking about growing up as a child and listening to old record players, and as soon as I heard that, I was instantly getting imagery in my head, so it just made sense to add those sound effects,” says Rektor.

“What’s cool about editing podcast sound effects is that you can take some serious creative liberties. Just by changing one audio file, you can change the entire setting of a conversation, like placing the speakers in a coffee shop versus putting them in a fine dining restaurant. Sound effects can totally change the dynamic of a scene. There’s quite a lot of creativity and freedom in that.”

“If it gets to the point where the listener thinks to themselves, ‘Oh, there’s another sound effect,’ then you’ve destroyed it,” says Rektor.

Using Sound Effects as a Transition Between Scenes

Sound effects can also be used to transition between scenes. Rektor notes that this is a tactic commonly employed by audio editors working in film, who insert sound effects from the upcoming scene right before a cut in order to mentally prepare the viewer for the scene to come.

“It’s a nice way to end a conversation and start pulling your brain into the next scene,”  says Rektor. “You’ll hear it sometimes, two people are talking and they get to the end of the conversation, and they’re looking at each other and you hear rain or something, and then it cuts to the next scene and it’s a rainy street. It’s a nice way to start getting your audience in the right headspace before it happens. It’s a good way to keep the story moving.”

Editing Music Into Your Podcast

In addition to the strategic insertion of sound effects throughout a podcast recording, you can use music to your advantage. “Music is a nice way to divide things,” says Rektor.

When you fade out of a podcast’s dialogue and into music, listeners generally understand that this either marks the end of an episode or a transition between chapters or themes. “NPR, for instance, will separate a lot of their chapters by fading up some music for ten seconds, and then fading it back out, and then starting on their next topic,” Rektor explains.

Use Podcast Sound Effects to Strengthen Your Recordings

One last takeaway that Rektor wants to impart to beginners who are about to try their hand at learning how to edit a podcast for the first time is that it’s not as daunting as it seems. “When I talk to talent,” he says, “a lot of the time they’re concerned about the challenges of editing, but it’s actually pretty straightforward, especially when you’re editing one audio track at a time.”

Now that you’re ready to fire up your editing software and begin polishing your recording with an array of podcast sound effects and music tracks, you should make sure that you have the ideal voice to help your podcast come to life. Voices.com is host to a wide range of talented podcast voice actors who can connect with your listeners and turn any material gripping into gripping audio.

It’s time to test your knowledge of how to edit a podcast by getting started on your podcast project today.