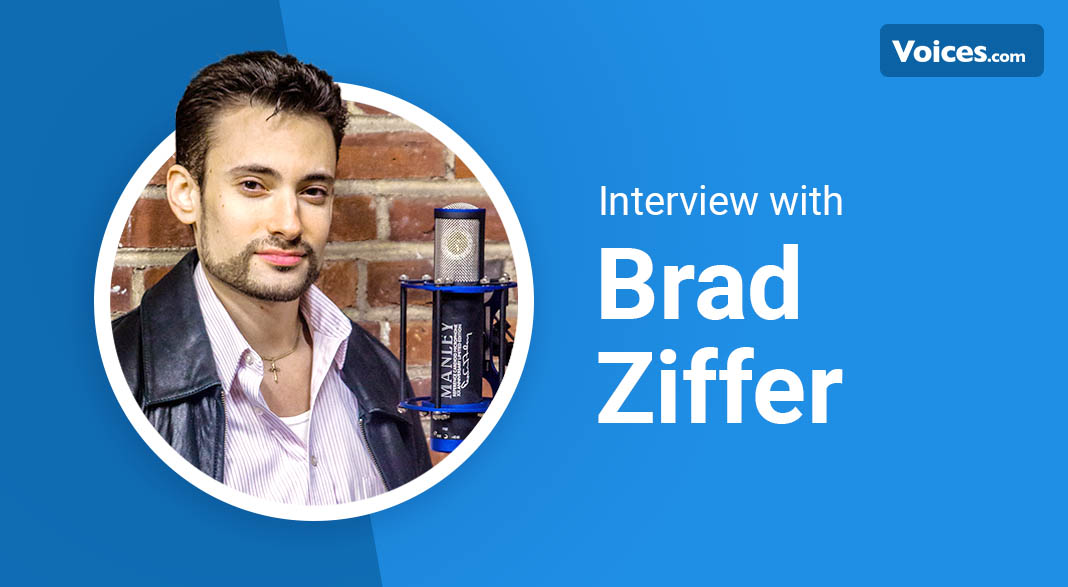 When you’re first getting started in the voice over industry, you may gaze ahead and try to envision where you’ll end up several years down the line. A career in voice over can be a long and winding road, abounding with exciting turns and unexpected opportunities. That’s why it’s valuable for voice actors to share the story of how they got where they are today, passing down business tips and tricks to the novices who are just beginning to forge ahead.

Brad Ziffer is a highly sought-after voice actor with experience providing reads for TV and radio commercials, video games, medical narration, and internet ads—just to name a few of the places where his voice can be heard. Based in the New York City area, Ziffer recently reached an important milestone in his career: he’s received over 2,000 reviews from clients who have hired him on Voices.

We caught up with Ziffer to pick his brain about achieving longevity in the voice over business, scoping out the best spaces to record from, top tricks for booking more work, and how his career has evolved from the day he recorded his first explainer video to today, where he was most recently granted the opportunity to provide the voice of Batman for the launch of a new toy line.

Voices: Congratulations on achieving 2,000 reviews! When you first started out, did you ever have a personal benchmark for what it would mean to “make it” as a voice actor?

Brad Ziffer: Thank you so much! I’ll be honest: I never really set a goal. In fact, before I got into voice acting, I was building a studio for music production. When you hear voice over in a commercial, I don’t think you really pay much attention to it. You know it’s there, but you simply take it for granted. I always loved doing silly voices but I never dreamed I could make a living reading scripts. Now that I’m actively doing voice over work, I pay closer attention and appreciate it more.

With any business, I think, the goal is longevity. Can I sustain myself over the long haul and be successful 5, 10, 15 years from now? I’ve been doing voice over full-time for over 10 years now, and I’m still going strong. To me, that’s a good indication that I’ve made it! I’ve managed to build a solid base of clients who continue to come back to me, and I routinely book work with new clients. I’ve also managed to become the voice of numerous brands. It was never so much about how many jobs I could complete in a year, or how many 5-star reviews I could obtain. It was simply about focusing on today, striving to do my best, and letting that philosophy open new doors.

What was the first job you ever booked with Voices?

BZ: I honestly couldn’t remember so I had to search back in my reviews! It looks like it was a promo/explainer for a company. I’ve done a lot of explainers in my time!

What I will tell you is that, compared to back then, my reading style and voice has evolved. With most voice actors, if you’ve been doing this long enough, you can hear your voice change over time.

I challenge anyone who has been in this industry long enough to go back and listen to their first or second job recording. My bet is that the reaction would be something along the lines of: Gosh, that was me?

What is your favorite project that you’ve been a part of through Voices?

BZ: I can’t say that any one stands out above the rest, but it’s always exciting to land a national broadcast spot! I’ve landed quite a few of those via Voices.

It’s really cool to hear your voice on national TV or radio. Those always carry more weight because they generate huge exposure and they make a great addition to your demos. A few of those national spots landed me in NYC studios. If you’ve never had the chance to record in a professional facility, it’s an experience!

BZ: Well, there’s no magic bullet to booking. It’s a combination of factors, like having a marketable voice that lends itself to multiple styles, being reliable, having fast turn-around times on booked work, perfecting the auditioning process, submitting as many auditions as you can, bringing life to scripts, and having good audio quality, solid demos, a professional web presence, and simply having fun! When you’re passionate about what you do, it shows in your work.

Voice over is like any other business: the more you put in, the more you’ll get out. If you’re dedicated to making it work for you, go for it 110% and don’t get discouraged.

If you could travel back in time and deliver some words of advice to your younger self as you were just getting started in your voice acting career, what would you say?

BZ: If anything, I’d try to encourage myself to avoid getting taken advantage of, and to always ask for fair rates. You need to be paid what you’re worth! Some clients expect a lot but want to pay very little. When starting out, most actors don’t know what a fair rate is. After all, most of us aren’t agents and don’t have the knowledge to negotiate based on usage. I encourage actors to seek out resources like the Global Voice Acting Academy Rate Guide. Bidding the lowest rates may actually make you look unprofessional!

What one piece of equipment do you absolutely need before you can start recording?

BZ: Before I can even think about traditional recording gear, it’s way more important for me to be in a space that is suitable for recording and booking work. People don’t realize how much the space around you influences your audio quality. There is a vast difference between recording in a booth and an open room, just like a highly reflective room is different from a treated room. The room, closet, booth, car, or bathroom that you’re trying to record in makes a big difference when it comes to the final product.

First, find an ideal space that’s quiet, isn’t reflective and is fairly balanced, then find the mic that sounds best in that space. With that, it’s not a one-mic-fits-all approach. If you have the luxury of testing out a few, I encourage actors to do so.

I usually find that I absolutely need my booth or ‘dead’ space before I can do anything. Even the best mic can sound awful in a poorly-treated space. If you have kids screaming, fans running, or traffic noise getting into recordings, you’re doomed from the start.

I’d say space, mic, and then preamp/converter, in that order. Oh, and don’t forget your pop filter! That’s definitely critical. In fact, I won’t touch a mic without one in front of it. No one needs to hear plosives in your recordings!

If you weren’t able to do the job yourself, who would you hire to narrate your life story?

BZ: That would be a toss-up. I’d have to say the late Jean Shepherd, who narrated A Christmas Story, or Daniel Stern, who narrated The Wonder Years.

Beyond the description featured in your Voices profile, when someone hears Brad Ziffer’s voice, what do they hear?

BZ: A voice that’s reassuring, confident and above all else, real. I think my voice is pretty unique in the industry and has a recognizable quality to it. A memorable voice is a voice that keeps on booking!

What’s your favorite part about being involved in the voice over industry?

BZ: Waking up each day and getting to be creative. Plus, the excitement and anticipation of not knowing what jobs may come my way. Everyday brings something new and different!

This industry certainly isn’t boring, and I have to say, getting to be your own boss and working from home isn’t too shabby either.

Is there somewhere your voice is now featured that, before getting into voice acting, you would never in your wildest dreams have imagined it would wind up?

BZ: Well, this year I’m the voice of Batman for the Marvel/DC Comics/Spin Master launch of the new toy line. There have been a number of promotional episodes created for DC Kids and other media outlets, and it’s really fun and exciting to see my voice paired with stop motion animation. What guy doesn’t dream of being able to say he’s Batman? Plus, anytime I hear myself on national TV, it catches me by surprise and seems surreal!

What’s your dream voice over role?

BZ: I would love to be a character in a Pixar film or land the voice of a recurring character in an animated series. So much of my childhood was shaped by cartoons like the Teenage Mutant Ninja Turtles.

With 10+ years in the voice acting industry, and 20+ years singing and performing on piano, Brad Ziffer is a seasoned professional. Graduating from Montclair State University, in Upper Montclair NJ, with a BA in Theatre Studies, Brad has since built a recording studio and spends the majority of his time voice acting, recording music, singing for events, and producing.

There’s a reason that Brad is in high-demand these days. He knows his way around analog, is obsessed with recording quality and customer satisfaction, and strives to give 110% in all he does! He owns and operates Brad Ziffer Productions, LLC.

Need a voice coach or someone who can help produce your demo? Brad has also expanded his voice over purview to provide coaching and demo production services for budding vocal talent.

Brad can currently be heard all over TV, radio, and the web. You may not realize it, but you’ve likely heard his voice.

Visit Brad Ziffer’s website and hear his voice on Voices. 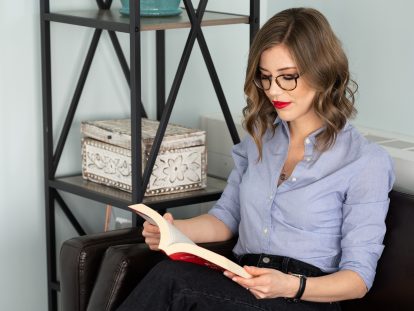 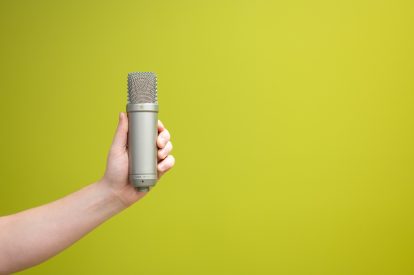 When it comes to recording audio for your YouTube videos, you want to make sure the audio turns out smooth, clear and easy to understand.