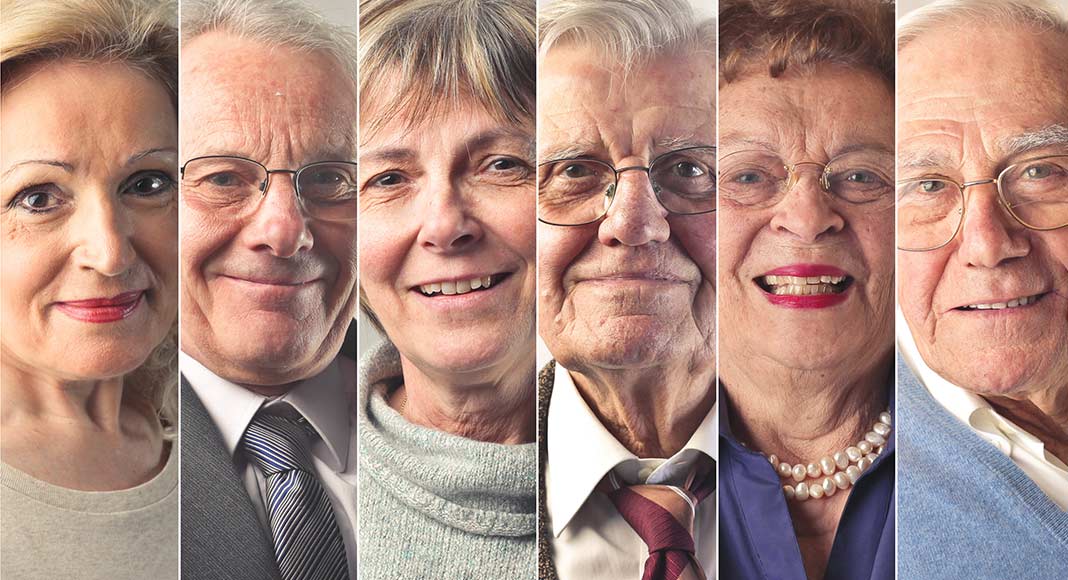 Report: The Future Looks Golden for Senior Voice Over

If you’re a voice actor who boasts a mature sound, you may be interested to learn that demand for voices like yours is expected to increase.

As the American population of those 65 and older continues to increase (it’s estimated that 1 in every 5 Americans will be over 65 by 2020), marketers and advertisers are going to need to source more and more senior and middle-aged sounding voices.

While Voices’s Report ‘Marketing in the Future American Economy: Baby Boomers, Aging Millennials and Advertising Strategies’ goes into deep detail over all of the factors at play, this article shares highlights of the insights, specifically for voice actors.

Changes to the American population are going to shake up exactly who marketers and advertisers are targeting – and the voices they’re looking for to connect with these audiences.

Here is how the American population is projected to change over the next few decades: 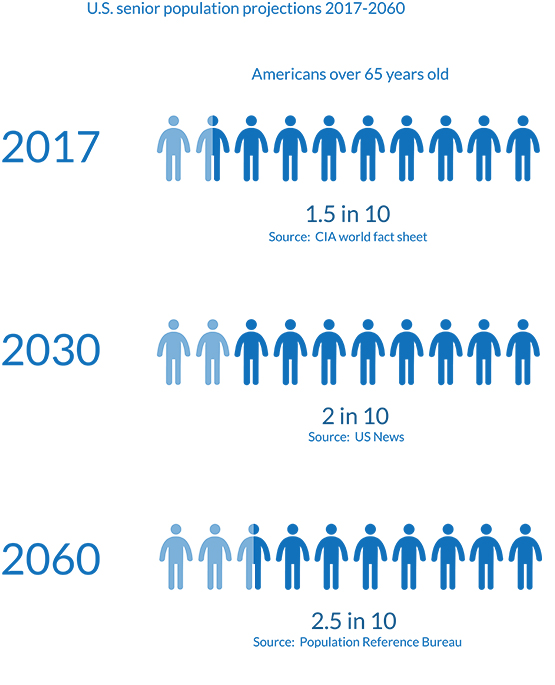 The growth in the portion of the U.S. that is over 65 is staggering!

But why does this matter to voice actors – and how will it impact opportunities in the voice over market?

Well, according to a Voices survey of approx. 1,000 creative professionals, one of the most influential factors guiding voice over casting decisions is voice age. Specifically, clients prefer to hire a voice that sounds like their target demographic or older.

With the above population projections, it’s easy to see how marketers and advertisers are going to be creating more content geared towards the 65+ demographic, as well as those who care for and about seniors (e.g. many of them middle-aged). Along with this trend, voice actors will see the number of voice over job postings calling for senior and middle-aged voices also increase.

Demand for Senior Voice Over is Already Increasing

Additionally, over the past three years, the demand for senior voices in advertising projects on Voices grew by 25%. 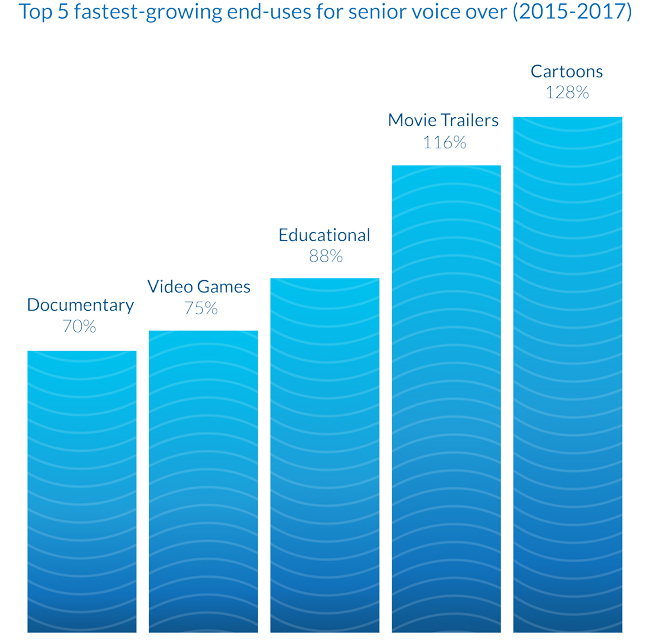 Senior Voice Over is Versatile and Not ‘Old-Sounding’

While it’s exciting to talk about the future of voice over, it’s also important to remember that opportunity is still plentiful now, as well. Voice actors who have middle-aged to senior sounding voices are finding great opportunities in a diversity of voice over work, from documentaries and video games, to luxury brand commercials, e-learning and more.

And on this front, it pays to recognize that a mature or senior ‘voice age’ does not mean an ‘old-sounding’ voice over. In fact, the range of older voices is wide and diverse – and is not to be confused with the exaggerated, ‘old-sound,’ which is often portrayed in cartoons.

“There is a shift in what we traditionally think of as senior. Boomers don’t like to think of themselves as old. Performance-wise the traditional vocal ‘fry’ ‘cackle’ and tonal ‘drop’ don’t translate well. ‘Talking senior’ is much more subtle. Think of Morgan Freeman or Bill Nighy. Frances McDormand, Meryl Streep, or Allison Janney. These are our seniors and they are the epitome of cool.”  – Kim Handysides

Below, they reveal the wide-diversity of work and range of positive experiences they’ve had so far.

Voice Acting Can Offer a Great 2nd (or 3rd or 4th!) Act in Your Career

“Since retiring from the architectural profession eight years ago, I became a voice over actor and haven’t looked back. Since that time I have found a niche playing roles such as ‘Voice of God,’ villainous video game characters, grandfatherly figures, and elderly hospital patients – just to name a few. With the aging of the Boomer Generation, I can see no shortage of voice over roles for at least the next 30 years.” – Elton Jones

Mature Voices Are Being Sought After by Advertisers and Marketers

“I do a wide range of styles and Senior is one that comes up more and more often. I have done the usual medical and legal ads, as well as real estate promotions and an infomercial for a sports betting website.”

“While Millennials are the darlings of the ad trade right now, half of our Boomer population is in retirement, with the other half hoping to retire over the next decade. Many seniors are healthier and more financially strong than previous generations. They are strong consumers for upscale real estate, cars, accessories and trips.” – Chris Phillips

Diverse Senior Voice Over is Needed in all Accents, Languages and Dialects

“About 50% of my work is in the senior market, and of that work, 50% of it are senior characters who speak in dialect. Italian and Spanish are common requests.”

“I am hired to voice characters who speak accented English or speak in a dialect or foreign accent. For example, last year I recorded an Italian Grandma for a marching band presentation at an Illinois high school. I also recently completed recording some tourists who spoke accented English for a Travel Channel documentary.” – Priscilla Hagen

“As a woman born in the Caribbean, I’ve discovered that there appears to be a growing need for English-speaking accents with a Caribbean lilt. As the world becomes more familiar with the sound of these accents, there’s a greater reach and inclusivity into reaching and speaking to people of all nationalities and all ages.” – Elenor Lindsay

Mature Voices Can Convey Affluence and Prestige, as Well as Character Reads

“As a 62 year-old voice over professional in the UK, in the business since I was 20, I have never been busier! A deep, older ‘actor’s’ voice – particularly with a British accent which I think adds a touch of authority and trust – gives a sense of gravitas and occasion.”

“The global population is aging and there is more disposable income for many older people, so it’s understandable that they would prefer to be given information by a mature voice about things like cruises and other trips, or about retirement property. “

“Although I am lucky my voice is still flexible enough to deliver a ‘younger’ voice, the ‘old’ voice is very useful for the varied characters I play for Escape Rooms and video games, such as wizards, villains and various warlords.” – Peter Baker

“For a long time, there were limited opportunities for senior voices, as the trend was for younger, middle aged-sounding voices. However, need for the experience, sincerity, and reassurance of a senior voice seems to be bucking this trend. Many clients are finding the older voice often carries more character, weight, patience, and reassurance, and less ’sell’.”- Michael Drew

While Millennials have long held the attention of marketers and advertisers, the growth in the senior population will cause an undeniable shake up for those who produce media.

However, for those who possess a mature-sounding voice, including those who can connect with middle-aged individuals who are caring for seniors, and preparing for their own golden years – the future looks bright indeed!