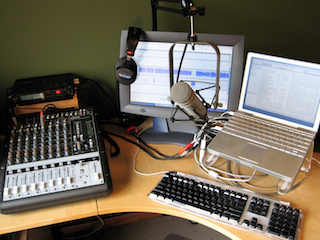 Voice professionals rely heavily on their computers for lots of reasons: To manage their auditions, record and produce demos, and maintain their online presence, among other things.

Most voice pros also don’t have an unlimited budget to play with. So when buying computers and related equipment for the home studio, they’re always looking for a better deal.

But is the latest wave of ultra-inexpensive computers worth considering? The answer depends on what your specific needs are. Read on for more.

Home studios are increasingly built around the personal computer. What used to demand racks of dedicated recording and production equipment can now, to a certain extent, be easily accommodated by a standard PC. From recording to editing and processing, this humble machine is more than capable of delivering the goods for today’s digital-era voice professionals.

That’s the good news. The not-so-good news is that every few years, you’ve got to spend a bit of money to either upgrade your machine or, more likely, replace it entirely.

Unlike a good microphone or mixing board, which can often remain usable for decades if properly cared for, the typical PC lasts about three or four – or on the outside, perhaps five – years before ever larger and more capable software and services render it obsolete.

Over the past couple of years, anyone in the market for an inexpensive computer might have noticed an explosion at the lowest end of the market. For $150 – or sometimes even less – Google and a number of its partners, including Acer, Asus, Lenovo and even Dell – would love to sell you something called a Chromebook.

At first glance, it looks like the perfect solution to the PC problem. After all, why spend $1,000 or more on a typical computer when you can bring home something that looks like a modern laptop for far less?

As with most technology purchases, the answer isn’t always as straightforward as it initially seems. Chromebooks are already revolutionizing the market for inexpensive computing, and for many everyday tasks and needs they represent the perfect solution for buyers on a budget. Although they look like a regular computer on the outside, however, they’re different enough from conventional PCs that a little advance research is necessary. Let’s take a closer look.

A New Approach to Computing

Compared to the typical Windows or Mac computer, a Chromebook takes a radically different approach to hardware and software design.

For starters, it’s designed from the ground up to be a lot simpler than an average PC. It doesn’t have its own hard drive or an equivalent solid state drive because it’s designed to use Google’s online services.

This web-centric, network-connected approach to computing makes Chromebooks a lot easier to set up and maintain. No need to install software on your own: Just connect to the web and get to work.

It’s a similar story when it comes to software. A Chromebook doesn’t run a traditional operating system like Windows or Mac OS X. Its operating system is called Chrome OS, and it works more like a browser than any computer you’ve ever used. This greatly simplifies workflow and lets you focus on getting work done. Similarly, you no longer need to worry about updating the operating system or any on-board software. All of that is taken care of, automatically and seamlessly, by Google.

Since pretty much everything is stored in the cloud, you can sign into your account from your Chromebook, another PC or Mac, an iOS- or Android-based smartphone or tablet, or any other network-connected computing device and pick up where you left off. As a result data backup is as good as it gets.

One thing to keep in mind is that traditional apps like ProTools can’t be installed on a Chromebook. While a some web-based apps and services can provide some studio capabilities, you’ll need to pick and choose your tools carefully to ensure you can get the job done. If your needs tend toward the higher-end of the production scale, you’ll likely want to try a Chromebook before you commit.

Chromebooks are extremely useful for mostly online work – think email, messaging, web surfing, etc. – but a more traditional computer may be a better fit for some of the more involved requirements of in-studio work. The traditional Windows computer has also undergone a pricing revolution over the past years, with some compelling entry-level offerings now being sold for about $200. These are much more like conventional computers – they come equipped with hard drives and, in some cases, solid state drives, which allow conventional software to be installed as it always has. As an added bonus, you can easily fire up a browser and access any web services that support your studio work.

Depending on which model you choose, different processors, amounts of memory and graphics capabilities will ultimately determine how much horsepower is available for in-studio production. As with a Chromebook, you’re best off taking a Windows computer for a test drive to ensure it meets your needs.

Depending on the kind of studio work you do, you may be able to fit a lower-priced machine like a Chromebook or entry-level Windows PC into your workflow.

Even if your needs are a little more involved, price-performance ratios in the computer market have never been better:

Once-high-end machines are more affordable than ever, and any reputable technology dealer should be able to build the right system for you. The key to ensuring you end up with the right technology for your needs is to have a full understanding of how you’ll use it before you start narrowing your search.

What kind computer are you using for your own recording needs? Let us know what you’re using – and how things are working out – in a comment.