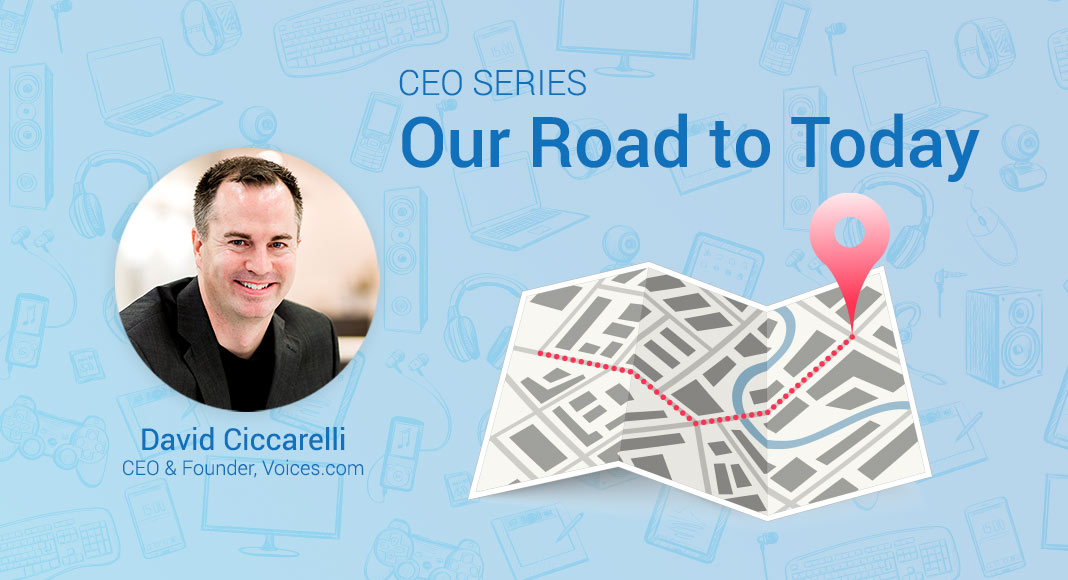 Voices CEO, David Ciccarelli: An Open Letter On the Acquisition of Voicebank.net

Over the next week or so, I’ve decided to write and share a series of open letters that tell the background story on why we acquired Voicebank.net, the detail behind our products and services, as well as our vision for a bright and prosperous future.

The following article, the first in this series, is a snapshot of the evolution of Voices, and how that led to our acquisition of Voicebank.net.

The Road to Partnering with Voicebank.net

To begin, many of you have heard our founding story. If you haven’t yet, in the spirit of getting everyone on the same page, you can read about how a singer-turned-voice actress and an audio engineer founded Voices.

Our journey along the road which ultimately led to our conversations with Voicebank.net, in some ways began with our application for and getting accepted into the Canadian Technology Accelerator in 2015, a 6-month long program where entrepreneurs with promising products were provided with advice from a mentor, learning programs, and an office to work from in New York City. It was a great opportunity for our team, as New York is our number one geographic market, as well as where a lot of talent agencies are located.

It was around this same time that we had reached a critical mass, where clients were beginning to specifically ask for union voice actors. We knew that SAG-AFTRA voice actors were nearly always represented by SAG-AFTRA-franchised talent agencies, and so it was clear we needed to speak with the talent agencies about how best we could all deliver on these client requests.

To begin to figure out next steps, I met with both talent agencies and advertising agencies. What I heard in these meetings was that people were happy to use Voicebank.net, a website started in 1998 that catered to the needs of the creative producer looking to hire union voice actors affiliated with SAG-AFTRA.

Our mentor at the Canadian Technology Accelerator suggested that perhaps we should explore a partnership with Voicebank.net. I then had a few conversations with Voicebank.net’s Jeff Hixon, about options, but, considering we were on opposite coasts, the timing just wasn’t quite right for us to explore those options. Nonetheless, a new relationship was formed.

In 2016, we engaged a consulting firm to guide Voices’s Leadership team through an exhaustive process of developing a 5-year strategic plan. We developed and considered more than 100 different ideas across a variety of growth avenues. One stood out as really being a positive game changer, and that was actually the original possibility of partnering with Voicebank.net.

Jeff Hixon, always gracious in our conversations over time, agreed to meet again to fully explore the idea of working together. During the meeting, Stephanie and I shared our founding story, and Jeff shared his. We were all amazed at their similarities, including how we were all pioneers who had recognized the need to bring the industry online.

We shared a formal proposal, whereby Voices would acquire Voicebank.net. With that, over the next several months we got to know each other’s businesses in detail, leading to a definitive agreement.

With the acquisition confirmed, Stephanie and I flew out to Seattle to bring the entire Voicebank.net team together to share stories and answer questions. The next morning, Jeff emailed current Voicebank.net customers, ensuring they were the first to know about the announcement. Hours later, the press release was distributed. It was this moment that much of the broader community was informed that Voices had acquired Voicebank.net.

We knew this would be a big move, but the scope of the response was unexpected.

Listening to the feedback inspired by the announcement has given me the opportunity to better understand the topics that are of current interest of the community our team works to serve.

With these insights in mind, over the next several days I intend to share some helpful information through a blog series. The information posted will fall under 3 key topics:

Tweet this article and I’ll see you again tomorrow.

This is the first in a series of Open Letter posts. To read other articles in this series, please see: